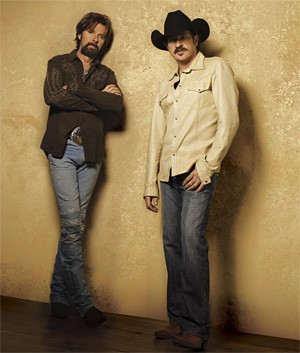 Before they became country music's biggest duo, Kix Brooks and Ronnie Dunn both toiled under the radar as solo acts. Once they teamed up on 1991's Brand New Man, which yielded three No. 1 songs ("My Next Broken Heart," "Neon Moon," and "Boot Scootin' Boogie"), they catapulted into the major leagues and have remained there ever since. Live, Brooks & Dunn rope in fans with sing-alongs and other audience-participation favorites. Equally adept at invigorating barn-burners ("Rock My World [Little Country Girl]") and plaintive ballads ("It's Getting Better All the Time"), Brooks & Dunn offer a little something for everyone. They tell jokes, bring out local Marines during "Only in America," and dance with a lucky girl or two they've plucked from the crowd. Oh yeah — they have tons of hits to sing too.