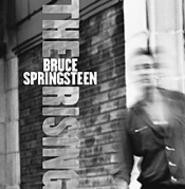 Bruce Springsteen spent most of the '90s in an artistic haze. Die-hard fans kept hoping for a return to past greatness after he eliminated the E Street Band and went into a recording tailspin, but it's safe to bet that not one of those fans would call any album after Tunnel of Love their "favorite Springsteen record."

Which makes The Rising all the more special. Inspired by the events of September 11, Springsteen took the E Street Band into a studio to construct 15 songs around the aftermath of that tragic day. Some of the tracks deal with "common" heroes (the same class he celebrated and explored in his early epics). Many of them deal with death. In fact, it's been a long time since rock music dealt this directly or effectively with the Grim Reaper -- and anyone who's lost someone close, no matter what the cause, may have ice in their veins not to be touched by the dark, dynamic, guitar-fueled "Further on up the Road" or the sadly beautiful "You're Missing," the latter of which looks at simple, everyday life amid heavy loss.

But beyond the storytelling, it's a pleasure to report that a great deal of The Rising is just terrific rock and roll. The best of these tracks -- the anthemic "Countin' on a Miracle," "Further on up the Road," the rollicking "Waitin' on a Sunny Day" -- stand beside Springsteen's greatest material. And the astute rock fan will happily identify elements in these songs that range from Dion, the Beach Boys, Phil Spector, and all the various kings of doo-wop to Curtis Mayfield and the Impressions, the Band, and of course, Dylan, among numerous others.

The Rising isn't perfect. CDs in general are too damn bloated -- every one-disc album now includes as much music as The River -- and this one could've used a little editing. "Into the Fire," a pleasant folker, goes on way too long. "Let's Be Friends (Skin to Skin)" strives for summer soul, but comes on more like bad John Mellencamp. And "The Fuse" -- accentuated throughout by drum loops -- doesn't completely work. But when The Rising does work -- and that's more often than not -- well, don't call it a comeback as dramatic as the Elvis '68 Comeback Special, but it's likely to fill old Springsteen fans with almost as much joy and relief.