Angelic harmonies and toilet jokes grease the path to success. 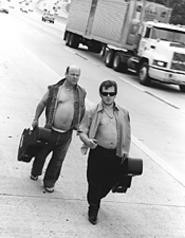 The Spinal Tap for the 21st century, Tenacious D has set itself up for greatness. The acoustic-rock comedy duo of Jack Black and Kyle Gass introduces its shows with proclamations such as "Black Sabbath, Iron Maiden, and Molly Hatchet could not be here tonight. But they all had sex and are proud to announce the birth of their two-headed baby, Tenacious D" and "Warning: If you want your asses blown out, stay in the room."

Even the D's bio states that the group is the greatest band in history. And when the group backpedals, it's just another put-on.

"Let me tell you something," Black says. "We have never claimed to be the greatest band in the world. Others have said it. We have not denied it. But we have never ourselves said that. Am I right, Kyle?"

Yet, the group's official bio is made up of two sentences: "Tenacious D is the greatest band on earth. Period."

"Our handlers are very excited about us," Black interrupts. "We did not write our fact sheet. But I will say that our album is probably the greatest album ever made. And let's leave it at that."

The portly twosome is joking, of course. Because Tenacious D is, in fact, a joke. A goof on acoustic folk music. A goof on heavy metal. And a goof on hip-hop braggadocio. On its short-lived cult television show, which ran on HBO a couple of years back, Black and Gass would take the stage on open-mic nights and proceed to assault the audience with a barrage of "fucks" and sexually explicit songs, all performed on the duo's acoustic guitars and with angelic harmonies.

"The reason we started was the same that any artist embarks on a work of art," Black explains. "To get attention. And, hopefully, some poontang. First, it reaches back to wanting love from Mommy and Daddy. And then it goes directly to poontang. But we haven't had any real groupie action. Then again, we have girlfriends, so we're not at liberty to say. It seems there was an opportunity at a recent show, but we got cold feet."

Which sounds remarkably like an episode of the HBO series, where, after the two finish serenading the audience with "Double Team" ("I'd like to place my hand upon your fuckin' sexy ass and squeeze . . . Have you ever been worked on by two guys who are hot for your snatch?"), a woman appears backstage, offering to take the D up on its proposal. Black backs out, telling her, "Don't confuse the art with the artist."

The artists in question met in the early '90s, when both were members of the Actors' Gang, an L.A.-based theater troupe founded by Tim Robbins (John Cusack and John C. Reilly also did time there). They formed Tenacious D five years ago, started playing local clubs, and were a big hit among the hipsters. Fans include Beck and Dave Grohl, who also happens to play on the D's recently released self-titled debut album, which was produced by the Dust Brothers (Beastie Boys, Beck, Hanson).

"We went knocking on [the record company's] door," Black, 32, says. "Then they opened the door and said, 'Come on in.' Were we surprised they said, 'Come on in'? Not really. We had an advantage over other new bands. We were already packing houses because of the cult following from the HBO show. It was like 'Hey, big labels, do you want a piece of this thing that's already semi-happening? All you have to do is [sign us].'"

And sign they did, giving the project a decent-sized budget and access to high-profile guests like Grohl, the Dust Brothers, and Phish's Page McConnell. "We were in complete artistic control over the record," Gass, 42, explains. "The record company really didn't know what we were going to give them. The Dust Brothers heard some bigger arrangements, and once we started, it was really enjoyable to blow [the songs] up."

"But the whole band was never there at the same time," Black clarifies. "We had some special times with all the people individually. It was very special and very strange."

"Sometimes we got performances over the phone," Gass says. "It was very personal."

Songs on the album include such fan favorites as "Kielbasa," "Tribute," and "Fuck Her Gently." And it's a funny listen. At least the first couple of times. But Black and Gass, whose influences range from Led Zeppelin to Peter, Paul & Mary and Snoop Dogg, put so much energy into it, you can't help but admire their tenacity and enthusiasm. With a breakout performance in High Fidelity last year as an arrogant record-store employee, Black is capable of stealing scenes with ease. Which he does, during the course of the interview. But Black and Gass really seem to enjoy each other's company. Or cracking each other up. Or at least one-upping each other. Witness this exchange, regarding the start of their tour in support of Tenacious D:

Black: "The tour doesn't officially start until we're on the tour bus."

Gass: "I don't think it starts until I take my first crap on the tour bus."

Black: "We've been told by tour experts that the No. 1 cardinal rule is: Never crap in the tour bus. And Kyle is already threatening to take a stinky poopoo on it."

Gass: "We were warned, though, that it's a myth. The reason? The bus driver doesn't want to clean out the shit. So I've now been told to go ahead and crap in there."

Black: "So people crap in there all the time?"

Black: "If you have to go, you ask the driver to pull over."

Black: "To the next truck stop. I can't believe your mind has been poisoned like that."

Black: "I don't care what he says. I think it's a good rule, and I think it's the cardinal rule of the road."

Which spurs the question, could the D exist if one of the guys weren't around? What if Black's starring role (opposite Gwyneth Paltrow, no less) in the Farrelly Brothers' forthcoming Shallow Hal makes him a bona fide movie star? "Jack doesn't like playing live as much as I do," Gass admits. "So I'm forming a tribute band to the D, featuring one original member. The other guy will be like a Marky Mark tribute singer. I'll take a few dollars off the ticket price. It will be called D-Licious."

"If you went back in time and erased Kyle, there would be no D," Black explains. "Kyle came up with Tenacious. He disagrees, but that's how I remember it. But could I be in a comedy rock band without Kyle? Yes. It would just be a question about the level of success I would have. I really don't know, and I'd rather not test it. At this point. I mean, I could bust off of Kyle and pull a full Tina Turner."

"True," Gass agrees. "But I would have to abuse you. And I would go to every show and heckle."