With the Robert Cray Band. Friday, September 3, at Taste of Cleveland at Tower City Amphitheater. 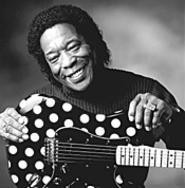 On his last two records, 2001's Sweet Tea and now Blues Singer, Buddy Guy has been retrofitted in an attempt to find a new (read: younger) audience. This isn't really a bad move. On Sweet Tea, Guy explains through his guitar that modern rock music could not exist without his supreme blues improvisations. Guy's playing on Blues Singer links him back to the Delta by way of Son House and John Lee Hooker. The disc is an acoustic set that presents Guy not as the electrified blues legend from Chicago's West Side, but as an unplugged, trouble-in-mind rambling man -- melancholic, but hopeful. Yes, it's probably a contrivance to set up a Louisiana-born, Chicago-bred, urban electric-guitar legend as a Delta bluesman. But the White Stripes do Led Zeppelin layered over some John Lee Hooker and Detroit blues riffs, and people call it post-post-punk or whatever -- isn't that just as contrived? A blues man playing the blues doesn't taste as sour as that.

Guy on the acoustic guitar is, to say the least, simple, singular, and great. When you listen to him live or on disc, it's like taking a musicology course: Guy's fingers can channel whoever he wants and show you how each one's style either emerges from or generates the others. So on tracks such as Willie Dixon's "I Love the Life I Live" or John Lee Hooker's "Black Cat Blues," you hear Guy's playing edge backward to touch a Dixon bass line or a Hooker boogie lead.

It's Guy's voice, however, that really captures our attention on this disc. Here, he sings like a bright new sling-blade -- shiny, sharp, and echoing in high falsetto on Skip James's "Hard Time on the Killing Floor," then mad-mean on "Crawlin' Kingsnake" and "Sally Mae." Guy's instrumental mastery and great voice make him always worth listening to.