Mandy Moore's going to be around for a while -- but that doesn't mean you should see her movies. 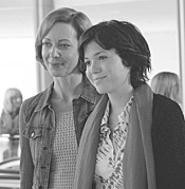 So much for those crackpot theories about flighty teenagers and their short attention spans. For four long years now, the bland pop star Mandy Moore has stuck in the brainpan of white adolescent America like a wad of bubblegum, and there's no sign that she will loosen her grip anytime soon.

The new Moore vehicle is a teen-romance-and-trauma movie called How to Deal, in which one of the teenagers dies from a heart attack. In her previous teen-romance-and-trauma movie, A Walk to Remember, one of the teenagers succumbed to cancer. Hang around Mandy long enough, and somebody's bound to die of something. Perhaps we should take warning that in an upcoming movie, she will play a U.S. President's daughter, who insists on going to college without Secret Service bodyguards. In that one, someone is sure to come down with a fatal case of rickets or maybe the West Nile virus -- possibly the Secretary of the Interior.

In the meantime, Mandy's still killing us with sweetness. Since her hit CD So Real went platinum back in 1999, the willowy teenager has cultivated an image that combines virginal goodheartedness (although she's nobody's fool), precocious intelligence (although not so much of it that she comes off as a smarty-pants), artistic sensitivity (although not so much of it that kids see her as a nerd), and fresh, gentle beauty (so, so much of it that every junior-high girl in America would kill for Mandy's long, lean fuselage, those bee-stung lips, and her very cool clothes). Altogether, she is a masterpiece of packaging and a triumph of marketing.

How to Deal conforms perfectly to the current Mandymania. As 17-year-old Halley Martin, who lives in a pleasant, nameless suburb in some pleasant, nameless state, Moore once more comes furnished with great yearning and significant teen problems. Her mother (Allison Janney, who's stowed the West Wing acidity) is smarting from her recent divorce, and her father (Peter Gallagher), a cartoonish radio DJ with a soul patch, a gold earring, and a gruesome case of middle-age craziness, is about to marry a bimbo in a publicity-stunt wedding. Halley's best friend (Alexandra Holden) is having sex with a new boyfriend, and her confused sister Ashley (Mary Catherine Garrison), is about to marry a Southern snob with some kind of stick up his butt.

In other words, poor Halley has seen enough at 17 to go totally sour on romance, despite the attentions of an exceptionally cool, witty classmate named Macon Forrester (Trent Ford). While Liz Phair, The Flaming Lips, and Skye Sweetnam blast away on the soundtrack (get yours today on Capitol Records), Mandy visits wardrobe for a couple of hundred fashion changes and grapples painfully but scenically with the assorted snares in Halley's life. One Sarah Dessen teen novel was evidently not enough to power this emotional juggernaut, so screenwriter Neena Beber cherry-picked from two of them, Someone Like You and That Summer. The results, competently if unremarkably directed by Englishwoman Clare Kilner, should prove compelling enough to Moore's huge legion of fans.

Among other things, they get to see Halley decline sex although she really wants it, get fitted for a bridesmaid gown of lavender satin, shout at Mom, read Madame Bovary, break her arm in a car crash, and generally play the thoughtful girl who's a loyal friend and really nice to look at, too. What are the chances that the heroine will relent on her anti-romance stance in the end and fall in love? What are the chances that some melancholy teenager will purchase a Mandy Moore album in, say, the next eight seconds?

For decoration, How to Deal also features an unwanted pregnancy, a batty grandmother who likes to smoke pot (Nina Foch, whose career stretches back to The Ten Commandments), and, at regular intervals, words of teenage wisdom sure to be gobbled up like so many Milk Duds by the Mandy-crazed hordes packed into the multiplexes. Sample: "The quickest way to ruin a relationship is to try and have a relationship."

Hmmmm. Katharine Hepburn in her prime couldn't have said it better. But then, old Kate didn't have Mandy Moore's advantages -- her own record company and a tenacious hold on the soul of almost every suburban girl in the country. There's more to come, of course. Moore's studio bio tells us that her next movie will be about a teenager who tries to "save" her gay boyfriend by making love with him (she winds up pregnant), and her new CD, Coverage, will feature updated versions of songs by Elton John, Todd Rundgren, Cat Stevens, and God help us all, Joan Armatrading.