Hot Hot Heat steps back from the dance-rock craze it helped create. 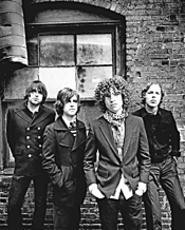 Steve Bays is on the phone from Belgium, and he's confused. "Wait, who am I talking to again?" he asks, a good 25 minutes after we began asking him questions. "What is this interview for?"

We break the news to the frontman of Canada's Hot Hot Heat gently, mindful of the permanently touring musician's fragile state: "We're talking because you guys are playing the Scene Pavilion on May 28."

"Oh, yeah," Bays says, the information slowly making its way toward that part of the brain still capable of storing data, despite heroic amounts of alcohol and sleep deprivation. "That's the show we're playing with the Killers." He laughs. "That's gonna be kind of a weird show."

We ask him why. Is it because the Killers are done feuding with the Bravery and are on the prowl for a new set of dance-rock foes? He laughs again, seemingly grateful to escape having to answer the 8,769th question about what it felt like to use a tinny disco throb many months before the rest of the kids in eyeliner and tight trousers started doing it.

"See, I feel like I wanna think bigger," he says. "You see, something like 50 Cent versus the Game and the Killers versus the Bravery just doesn't seem that impressive." We suggest setting his sights on newly 'tween-rocking American Idol champ Kelly Clarkson. "Nah, she's still too slow-moving," he replies. "Maybe, like, Queens of the Stone Age." We inform Bays that Queens king Josh Homme has red hair and is reportedly 19 feet tall. "Good point," he says. "We'll probably just settle on Eisley." Since Eisley is a group of young Christian siblings from rural Texas, we agree that this sounds like a swell idea.

Still, it'd be a fairer fight than you might think. On HHH's recent sophomore album, Elevator, Bays and his bandmates -- drummer Paul Hawley, bassist Dustin Hawthorne, and new guitarist Luke Paquin, who replaced former six-stringer Dante DeCaro shortly after the Vancouver-based group finished making the album -- distance themselves from the dance-rock pack by highlighting their affinity for super-wimpy 1970s power-pop. Much more than igniting fond memories of fighting the establishment to the sound of old Gang of Four singles, Elevator tunes like "Goodnight Goodnight," "You Owe Me an IOU," and "Pickin' It Up" -- each a shapely, compact collection of bouncy rhythms and tightly coiled melodies -- remind us of driving to junior high school with Elvis Costello and Todd Rundgren nuggets playing on the car radio.

"We wanted it to be big and bright and huge, but still kind of raw," Bays says of the disc, which has been in various stages of gestation since 2003, when Sire Records signed Hot Hot Heat and reissued Make Up the Breakdown, the band's crackerjack debut. They did some recording in L.A. in early 2003 with producer Eric Valentine -- who's worked with Smash Mouth and the 19-foot Josh Homme, among others -- which quickly taught them a lesson about major-label activity.

"When we did that song with him, that was like the first time that we realized, Okay, there definitely are producers out there that we don't want to work with," Bays says. "We felt like he just really didn't get us. He tried to make us into something that we weren't on that recording, so that recording never came out."

The singer says that after they started making demos of new material on their own, the band met with many more producers. "We kind of started to go with Rick Rubin, but then we decided that even though he's a great producer for other bands, Dave Sardy kind of matched us better," Bays explains. So partway through preproduction with Rubin, the band bailed and hooked up with Sardy, a wide-ranging studio vet with credits on records by Marilyn Manson, Johnny Cash, and Jet.

Bays considers the time the band spent in the studio making Elevator to be average for an act at HHH's level, even if the wait separating it from Breakdown -- a two-and-a-half-year period that included the dance-rock explosion now landing them on bills with the Killers -- made it seem as if the band were twiddling its thumbs on Sire's dime.

"You hear about a band like Deftones that spends five years on an album," he says. "I think that's just because they don't really know what their direction is, so they're just scrambling. Whereas we knew what our direction was. We had the whole album already recorded ourselves; we just wanted to spend a lot of time getting cool sounds." Like? "Every song has a different drum sound, every song has old amps and random Russian technology and old Nazi microphones and weird gear. We just experimented with it."

You can hear that sense of adventure on Elevator -- in the trippy, multi-tracked vocals of "Ladies and Gentleman" or the tweaked keys in "Island of the Honest Man." But more than that, you hear what Bays says the band was looking for in the first place: a bigness and brightness that sets HHH apart from many of its peers in the relatively darker-hued electro-rock scene. Elevator suggests that Bays would rather break away from the pack than rule it from within.

"The goal with this album was the songs," he explains, "not about saying, 'Hey, check out how we're totally dance-punk.' We wanted it to be a bit more timeless." Just like a good old-fashioned feud.