With Remembering Never, Devildriver, If Hope Dies, and Artimus Pyledriver. Saturday, May 27, at the Agora Theatre. 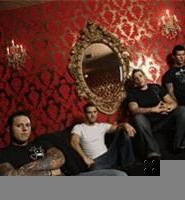 On Bury Your Dead's most recent studio album, 2004's Cover Your Tracks, every song bore the name of a Tom Cruise movie, suggesting that the group will somehow incorporate the title or slinky theme song of Mission Impossible III into the set.

Like Cruise's character Ethan Hunt, frontman Mat Bruso completes his objectives, even when under serious physical duress. Just a few minutes into a May 2005 gig at the Anaheim club Chain Reaction, one of Bury Your Dead's guitarists executed a "reverse guitar throw" that inadvertently bludgeoned the singer. Although Bruso was gushing blood from two circular cuts (from the tuning knobs) and an immense gash (from the headstock), his rottweiler vocals never wavered as the Boston-based band played 10 more high-velocity, stutter-riff-driven cuts. Last year's Bury Your Dead Alive documents this gig, one of the most impressive performances in hardcore-tough-guy history, and the headstone-shaped DualDisc also contains the rare essential DVD extra: Post-show emergency-room footage that pairs the good-natured narration of the surprisingly charismatic Bruso with gruesome suture scenes.