A hot Hieroglyphics MC tries out a new persona and a new approach. 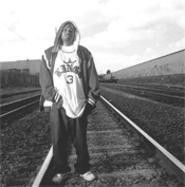 The MC's name is Casual. His ambitions are anything but.

It's still a few hours before a concert in Tampa, and the Oakland rapper and label impresario is trying to make use of the downtime. He has a new album to promote, and he's in the early stages of writing a book -- part memoir, part business manual. But at the moment, he's bemoaning all the revenue being lost because the familiar logo of his crew Hieroglyphics isn't being fully exploited.

"That logo is damn near a multimillion-dollar logo. You could put it on anything and sell it," Casual says. Yet, he adds, discussions of a Hiero clothing line still haven't gotten far off the ground. "We wastin' money every day we don't have it," he says, a hint of concern lending an edge to his laid-back California drawl. "It's a whole bunch of stuff we ain't doin' that we should."

Welcome to the nonstop hustle of indie hip-hop. It's a lifestyle Casual knows better than most; Hiero Imperium, the Bay Area label he helped found, has been going strong for nearly 10 years now and boasts a stable of experienced stars, including Del Tha Funkee Homosapien, Pep Love, Domino, and Souls of Mischief.

All those acts (except Del, who is doing only select dates and won't appear in Cleveland) are part of the Live & Direct '05 Tour, an independent hip-hop package that also includes the gritty Brooklyn posse Non-Phixion, Organized Konfusion collaborator O.C., and Seattle's Boom Bap Project.

Perhaps a better name for the tour would be "Major-Label Survivors." Almost every act on the bill -- including Casual, Del, and Souls of Mischief -- has been through the big-label wringer. They're also veteran MCs who can recall a time before hip-hop dominated the musical landscape.

"Back when we was comin' up, it was hard to even find a hip-hop station," Casual says, recalling the scene of the late '80s and early '90s. "Nowadays, a mediocre hip-hop song gets 40 spins [a week], and it's hot to everybody. Whatever gets 40 spins is hot."

Casual's latest disc, Casual Presents: Smash Rockwell, his third proper album, has its share of hot cuts, including the leadoff single, "Say That Then," an addictive ode to bringing "that real hip-hop from way back when." But it's also informed by a left-field aesthetic. Casual's new alter ego, Smash Rockwell, owes something to the high-concept hip-hop duo Handsome Boy Modeling School, with whom Casual once toured.

Smash Rockwell, Casual jokes, is actually the cousin of HBMS's Chest Rockwell (aka superproducer Prince Paul). "I'm a graduate of the Handsome Boy Modeling School," he says. "I paid my 60 bucks, and I came out as Smash Rockwell." More seriously, Casual explains that Smash Rockwell "is just all the stuff that people like about Casual, concentrated. It's Casual at his best."

Producers Jake One, Dante Ross, and HBMS's Dan the Automator give Casual a wider sonic palette than ever before. And the subject matter, while frequently critical of the current state of hip-hop, avoids the negativity of Casual's last outing, 2001's He Think He Raw, which he now admits "is just an album of a dude ventin' too much shit."

In addition to broadening his sound, Smash Rockwell also offers a platform for some of Casual's Bay Area inspirations, including E-40, Too $hort, and Richie Rich, who make guest appearances. The homage was important, Casual says: Although both are signed to big-label Jive Records, Too $hort and E-40 have remained in touch with their roots. The two helped pioneer out-of-the-trunk cassette and CD sales, and have always seemed successful in spite of their major-label deals, not because of them.

"It's a real independent musical culture in the Bay, and the major labels have never really figured it out," Casual offers. "I guess we appear to be hard-headed when it comes to collaboratin' with these big labels, but we saw that you can sell 15,000 or 20,000 units right out of your trunk at $10 each and keep all the money. You aspire to get a deal, but that don't work out. It's an indie thing."

Like $hort, E-40, and labelmate Souls of Mischief, Casual had his own deal with Jive. The subject of a bidding war after a show-stopping performance at the 1992 Gavin Convention, he appeared poised for stardom. Yet despite a four-mic review in The Source for his 1994 debut, Fear Itself, and his hip-hop hits "That's How It Is" and "I Didn't Mean To," the label never figured out how to promote him effectively.

According to Casual, the failure crossed into the realm of "sabotage."

"Just for example," he says, "there was one publicist who didn't wanna hook up no interviews for me, because she said I wasn't articulate. That's the type of stuff I had to deal with."

Both Casual and Souls of Mischief would leave Jive, ultimately joining forces with fellow major-label veterans Del, Domino, and Pep Love in 1997. But the founding of Hiero Imperium "wasn't no fairy-tale story, like we took all this money we made from the major labels and set it up," Casual says, laughing ruefully. "We were all broke."

Yet from such humble beginnings, operating out of its lawyer's office with little more than a phone line, fax, and the desire to see "who had some love for us," Hiero has become a nearly self-sufficient enterprise. It all started with the Hieroglyphics crew's 1998 debut, Third Eye Vision, which showcased the label's talent, sold almost 150,000 copies, and provided the seed money for the Hiero venture.

The label is now housed in an Oakland building owned by the Hiero clique and boasts warehouse space, offices, and a recording studio. Distribution, a tougher nut to crack, is next on the list, but true to form, Casual has even bigger plans.