At the World Open Bench Press Championship, ass-ogling is encouraged. 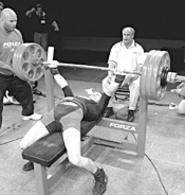 If Steve Petrencak placed a classified ad, it would read something like this: "SWM, 36, powerlifter from Sagamore Hills, will flex his 15-inch biceps and 39-inch chest for gold."

And he's hoping the judges will hear his call this weekend at the World Open Bench Press Championships of the International Powerlifting Federation. For the first time in its 15-year history, the tournament will be held in the U.S., with 229 lifters from 30 countries competing in 11 weight classes. From the lightweight 97-pound level for women to the super-heavyweight men's division of lifters who weigh more than 275 pounds, each competitor is scored on technique and the amount of barbell weight lifted. If an athlete drops the bar or freezes in mid-lift on all three attempts, he "bombs out."

Petrencak doesn't want to think about that. After 14 years as a 123-pounder, he's beefed up to 132 pounds to take on Japanese phenoms such as Kiroyuki Isagawa and Kenichiro Matsumoto, who has bench-pressed a record 457 pounds in his weight class. To Petrencak -- whose personal best is 340 pounds -- his opponents' lifting skills are unorthodox. "The Japanese are masters of technique," says the 5-foot-5 Petrencak, who trains four days a week at Kings Gym in Bedford Heights. "They can contort their back so they don't have to press the bar that far. So the bar might move only a couple inches [off the rack].

"When they arch so much, it gives the illusion that their butts aren't on the bench, and I've seen them get booed at the international level. But I wouldn't say it's cheating, because they're obviously within the rules."

He should know. Petrencak has lifted at four international meets, collecting a bronze medal in New Zealand three years ago. This year, he's banking on home advantage for the gold. "I know I'll be better off for it," says Petrencak, who wants to break the American record of 381 pounds in his division. "Staying in the same time zone does wonders for you. In another time zone, it may be the equivalent to four, five [o'clock] in the morning, and your body is not used to that."

He credits his ex-trainer, Larry Miller, for helping to bring the match to Northeast Ohio. A silver and bronze medalist at four international lifts, the 50-year-old Twinsburg dentist thinks the competition will be fierce -- especially from the Russian, Ukrainian, and Japanese teams. Still, he's worried that the scoring this year will be "political," with some Eastern-bloc judges penalizing the Americans for no reason. "I've been to competitions before where, I will positively, absolutely tell you, I was robbed of a gold medal," maintains Miller. "A lot of the Japanese have their hips on the bench, not their butts. And some judges overlook that."

The potential for crooked scoring is always in the back of Petrencak's mind too. "You gotta go in there with the mindset to go three-for-three, get all your lifts, and let everything fall where it may," he offers. "I don't want to let my body know what failure is."