Billy Bob doesn't say much, but he's the perfect Man for the Coens' con job. 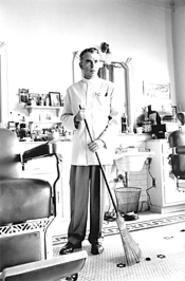 Joel and Ethan Coen's periodic genuflections to classic Hollywood are inevitably accompanied by a knowing wink from one brother and a wry smile from the other. These devoted movie buffs' versions of vintage gangster pictures (Miller's Crossing) or the populist comedies of Frank Capra and Preston Sturges (The Hudsucker Proxy) are not full-blown parodies, by any means, but their slightly surreal tilt sends a message: However deep the Coens' devotion to the past may run, they are also thoroughly postmodern guys who know exactly what year it is and come equipped with just the right touches of absurdist playfulness and ironic detachment.

The Man Who Wasn't There, set in sleepy Santa Rita, California, in 1949, is the brothers' second excursion into latter-day film noir -- the brothers' debut, 1985's gory Blood Simple, was the first -- and on the surface, it's an homage to the hard-boilings of novelist James M. Cain. In the '40s, Cain's sublime pulp fiction was the basis for such sardonic Hollywood classics as Double Indemnity and The Postman Always Rings Twice; in 2001, he inspires black comedy. For all its long shadows and ominous atmosphere, this is a very funny movie -- as funny as the Coens' masterful Fargo, in which a blackmailer stuffing his partner into a wood chipper became the stuff of belly laughs.

Begin with the requisite antihero, a placid small-town barber named Ed Crane. As written by the Coens and played by a perfectly laconic Billy Bob Thornton, gray, anonymous Ed is a reasonable facsimile of the beleaguered workingmen Cain favored as his protagonists -- drifters, bank clerks, insurance salesmen. Comically passive but plagued by a gnawing, unnamable hunger, Ed has nothing to say, at least not to others. His brother-in-law, Frankie (Michael Badalucco), does all the yakking in their shop. Ed simply waits for something to happen to him. He's an ideal character for black and white, and the Coens oblige, with some brilliant help from their longtime cinematographer, Roger Deakins. This is gorgeous black and white, textured and nostalgic.

These filmmakers can't keep their tongues out of their cheeks for long, so when Ed Crane gets his shot at success, it has a ludicrous twist. A loudmouth wearing a bad toupee (Coen regular Jon Polito) bursts into the shop, announces he's an entrepreneur named Creighton Tolliver, and adds that he's shopping for a silent partner in his exciting new business. Dry cleaning. Wave of the future. There's no one more silent than Ed, of course, and for that matter, no one drier. He's the man for the job. Just one problem: In order to get rich quick pressing pants, he needs 10,000 bucks.

The hunger for cash has always fueled the complexities of film noir, and the Coens follow suit. No sooner has the dim bulb lit up behind Ed's hooded eyes than the treacheries and false moves driving the brothers' plot start to multiply. Not only is the shady dry-cleaning man a con artist; Ed's dissatisfied wife, Doris (Frances McDormand, Mrs. Joel Coen), turns out to be wayward, and her affair with the manager of the local department store (what else but "Nirdlinger's") seems to provide Ed with a foolproof opportunity for blackmail. Sopranos cultists may be startled to find beefy James Gandolfini in the role of Big Dave, the blustering and adulterous store manager, but at least the Coens provide an excuse for his bridges-and-tunnels accent: Born in Brooklyn, Big Dave migrated to California in the '30s and married the dry-goods heiress Ann Nirdlinger (Katharine Borowitz), whom we later see to be a spaced-out fantasist who imagines Martians in the back yard.

If you think Murphy's Law overwhelmed a wronged husband's attempts at homicide in Blood Simple, wait until you get a taste of the comic turns that befall poor Ed Crane. Before long, there's a corpse, then two, in the picture. But Ed's problems are only beginning. A hick through and through, he's no better at judging musical talent than he is at choosing business partners, so his growing obsession with a teenage striver named Birdy Abundas (Scarlett Johansson), whose entire repertoire consists of one Beethoven piano sonata, is way off the mark. So are his relationships with the movie's two hilariously drawn lawyers -- one a dull-witted, small-town drudge (Richard Jenkins) who each evening takes a nip and falls asleep on his porch swing, the other a flashy operator named Freddie Riedenschneider (Tony Shalhoub).

Like the classic noirs of Billy Wilder or Abraham Polonsky, The Man Who Wasn't There depends more heavily on menacing atmosphere than coherent plot, but everything is lightened by the Coens' irrepressible urge to wise off. The neo-noir efforts of John Dahl and a few others aside, the genre is moribund, and the only useful way to resuscitate the corpse, even for a moment, is with wicked gallows humor. In this the brothers are relentless -- right down to the final scene in an execution chamber. To call it great fun may be an exaggeration, but there's no reason to stop laughing at the cruel jokes life plays against the Ed Cranes of the world.