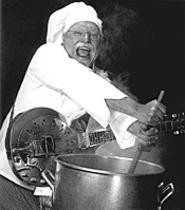 One of the East Side's former favorite watering holes, Solon's Swamp Club, will soon be back in business, under new owners Dario and Liana Picciotti. Best remembered for its huge portions and turbo-charged noise levels, the original Swamp ran dry in 1997, after almost a decade. What followed was a string of ultimately unsuccessful operations, including Eugene's, the Sapphire Grille, and most recently, Allure nightclub, which the Picciottis bought in January.

After a brief shutdown early this week, the spot resumes life on Friday, July 22, with the original name intact, more than a dozen flat-panel LCD televisions, a regular schedule of weekend blues and rock, and a big menu of Creole and Cajun classics from Executive Chef Shane Broussard.

Gumbo Mumbo . . . While we're speaking southern, Florida musician-cum-chef Bill Wharton (aka the Sauce Boss) is on the road again, headed for Cain Park's Evans Amphitheater. Filling a niche apparently carved by the spawn of Paul Prudhomme and Ry Cooder, Wharton (accompanied by his band, the Ingredients) puts on a bluesy show that includes both tasty licks on his slide guitar and a chance to lick up a spoonful of his tasty, Baton Rouge-style gumbo -- which he brews onstage during the course of his performance and distributes at its end.

While his "gumbo rider" with Cain Park calls for chicken, shrimp, oysters, and crawdads -- along with a 12-gallon pot -- the grandfatherly Wharton admits that each batch tends to develop its own identity. "I've thrown in alligator, snappin' turtle, redfish, lobster, chocolate birthday cake -- and one time I think some whiskey ended up in the pot. I don't know how that happened."

On his website (www.sauceboss.com), Wharton claims that he's fed more than 125,000 fans during the past 15 years. (It also hawks his eight albums, and his Liquid Summer Datil Pepper Hot Sauce.) But his recipe only serves 100. So what happens if more fans show up? "All I can say is, it's biblical," Wharton replies. "I don't know how, but somehow, it works out."

Small bites . . . Where does a guy with a 3,500-bottle wine cellar go when he wants to eat? If he's Sebastian Cangemi, wine manager at Miles Farmers Market (28560 Miles Road, Solon), he heads to Hudson's Downtown 140 (140 North Main Street) for its award-winning wines and Executive Chef Shawn Monday's menu of tapas-like treats. Apparently, the admiration is mutual. After Cangemi put a bug in his ear, Monday began offering Widmer Cheese Cellars' rare, handcrafted, eight-year-old cheddar as part of his artisanal cheese plates; the intensely flavored Wisconsin cheese is made exclusively for Miles Market, and Monday's restaurant is the only one that gets to serve it . . . Wine lovers will want to set aside Monday evenings to dine at either Moxie (3355 Richmond Road, Beachwood) or Sergio's on University Circle (1903 Ford Drive). Both spots are offering 50 percent reductions on all wines regularly priced at $100 or less. That means a bottle of Moxie's $84 Jordon Cab, for instance, will set you back just $42 . . . It's not necessarily diet food, but area Chipotles recently expanded their typically tightly focused menu of humongous burritos to include customized salads. We tried ours topped with organic black beans, spicy corn salsa, adobe-marinated chicken, and shredded cheese, with the chipotle-honey vinaigrette on the side. Yum.