Called on the Carpet 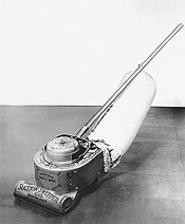 Talk about hospitality. At the Hoover Historical Center in North Canton, all the displays suck, and the guests get to pick up lint.

Like the collection of a crazy aunt with a cleanliness complex, the mini-museum boasts six rooms of vacuum cleaners — or "suction sweepers," as the pre-electric dinosaurs were called — from the 1860s' "Baby Daisy," with hand-operated bellows, to newfangled models that could practically direct traffic.

The center, which includes other companies' creations as well as Hoovers — though the Hoover is definitely the emphasis here — is filled with cleaning implements designed to put an end to beating a rug with a stick. Some of them look like instruments of torture: The frontier-era Kotton suction cleaner is a hundred-pound behemoth that the "driver" actually had to stand on, then rock back and forth to activate the bellows for suction.

Hoping to make the historical center more interactive, coordinator Ann Haines has Hoover's engineers working on a replica of the Kotton, so visitors can take it for a spin. (At this point, the old bellows cleaners can't be touched.) For those who prefer to test their strength, those selfsame engineers are also making copies of various manual carpet cleaners.

The history of upright vacuum cleaners ostensibly begins in 1907, when J. Murray Spangler, an asthmatic janitor for a North Canton department store, invented the lightweight electric sweeper to combat his sneezing fits. He took his idea to William "Boss" Hoover, a tanner who gladly started the Electric Suction Sweeper Company in North Canton when he saw that the automobile would severely crimp the demand for his saddles and bridles.

Since then, the only time the later-renamed Hoover Company didn't cut across the rug was during the 1940s, when Uncle Sam enlisted it to churn out doughboy helmet liners and fans to cool off overheated weaponry. After the war, Boss Hoover picked up where he left off, but started using plastic in place of metal, lightening the vacuum cleaners considerably.

"This one actually floats on air," says Haines, as she pulls out a strange pod without wheels that could be a model of a lunar lander. In 1956, Hoover introduced "the cleaner that floats," made possible by molded plastics — a model popular until the deep shag carpeting of the '70s grounded it. The hands-on display allows visitors to marvel over the rotund plastic shell encasing the bag, which really does float as the vacuumer moves the hose and vacuum head across the carpet.

But Haines is quick to point out that the museum is more than just sweepers. Recently redecorated for a Victorian "Designer Showcase," the Hoover family's 1853 homestead has been transformed into a historically correct Victorian mansion, with plenty wall-to-wall carpeting to keep clean (including a room with leopardskin-patterned carpet, fashionable during Grover Cleveland's heyday).

In the final room, the Hoover bias comes through, and history is set aside in favor of trivia about the latest in vacuum cleaner technology. There's not a Dirt Devil to be found, and the gist is that the new Hoover Windtunnel is the cat's meow of upright cleaners. The Windtunnel comes with a little light that indicates whether the floor is dirty (red) or clean (green). The hands-on demonstration, however, displayed only a solid green light.

"Well," admits Haines with a smirk, "we don't have a lot of dirt here. We keep it pretty clean." — David Powers

The Hoover Historical Center is located at 1875 Easton Street NW, North Canton, at the front of Hoover Park. Hours are 1-5 p.m. Tuesday through Sunday. Admission is free, but groups need reservations. For more information, call 330-499-0287.