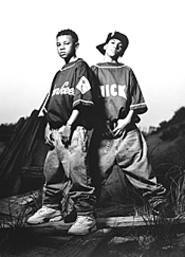 Musically, the '90s boil down to this: In January 1992, grunge gods Nirvana knocked pop king Michael Jackson off the No. 1 position on Billboard's album chart. And for most of the next eight years, commercial radio was unusually diverse.

Rhino Entertainment -- the folks who brought us the box sets No Thanks! The '70s Punk Rebellion and Like, Omigod! The '80s Pop Culture Box (Totally) -- have compiled Whatever: The '90s Pop & Culture Box, a seven-disc set of 130 songs. Individually, many of these tracks have been overplayed to the point where you probably can't imagine wanting ever to hear them again. But when 17 or so of these tunes are strung together on one disc, they create a mesmerizing time warp that takes you back to the days when American Eagle Outfitters inched toward an I.P.O. by selling piles of overpriced flannel.

From MC Hammer to Chumbawamba, every song gets a concise blurb in the book of liner notes, which also includes an essay by Jim DeRogatis, whose Milk It! is the definitive reader for the alternative era.

Only a few groups that didn't record for the Warner Bros. family are included here, so Whatever doesn't represent the big four grunge bands, the rap-rock/nü-metal cracker barrel, murderous Swedish death-metalers, every trip-hop artist worth noting, and the late-decade crop of platinum teenyboppers. But -- in addition to nuggets from the Gits, the grunge B-squad, and the Juliana Hatfield Three -- Whatever hits the era's major touchstones. Read on, as we revisit the high and lows of the previous decade.

Artist, Song: Kris Kross, "Jump"
Where and when it became impossible to avoid: Malls across America, summer 1992.
Significance: Dr. Dre, the No-Limit Army, Tupac, and Biggie aren't here -- so we're left with Kris Kross. The duo's success proved that the nation was so hungry for rap that we'd listen to anything.
Result: Imitating these pre-adolescent rhymers, misled youth wore baseball jerseys backward.
Good or Bad: Bad.

Artist, Song: Silk, "Freak Me"
Where and when: High-school dances, 1992.
Significance: Destroyed the pretense of slow dancing being anything but a form of foreplay.
Result: The dirty dance called "freaking" was forbidden at many a '90s prom, in the biggest ban of the kind since Footloose.
Good or Bad: When something upsets so many school boards, it's hard to call it bad.

Artist, Song: Tori Amos, "God"
Where and when: Member-supported radio, 1994.
Significance: Loaded with hard questions, the song suggested that music by women could be really popular -- if they'd just tone it down a little, which Joan Osborne and Jewel did in superficially spiritual smash singles also included here.
Result: The girls-only Lilith Fair tour.
Good or Bad: Good, except for Jewel.

Artist, Song: The Flaming Lips, "She Don't Use Jelly"
Where and when: The Fox Network, Wednesday, March 1, 1995.
Significance: When art-rockers the Flaming Lips played Beverly Hills 90210's Peach Pit After Dark, Aryan poster-boy Steve Sanders had a soulful experience that would prompt him to remark, "You know, I've never been a big fan of alternative music, but these guys rocked the house!"
Result: Sanders' response mirrored that of the Gen-Xers buying tickets to the eclectic traveling festival Lollapalooza, their minds blown by the idea that music can really move you.
Good or Bad: Lips good, Steve bad.

Artist, Song: Ani DiFranco, "Not a Pretty Girl"
Where and when: Predominantly female liberal-arts colleges, 1995.
Significance: Evolving from unplugged icon to electric iconoclast, DiFranco was the yin to Kurt Cobain's yang. Running her own record label (Righteous Babe), she resisted all urges to grab for the major-label brass ring, thus not incurring the commercially rooted pressures that helped drive the mighty K.C. to suicide.
Result: If we can accurately extrapolate from DiFranco's example, Cobain's 10th album might have been pretty dull, filled with limp poetry and limper jazz.
Good or Bad: Very good.

Artist, Song: Primitive Radio Gods, "Standing Outside a Broken Phone Booth With Money in My Hand"
Where and when: Alternative radio, 1996.
Significance: This new-age pabulum had the admirable message that money and technology won't bring us happiness. But "Mother Teresa's joined the mob/ And happy with her full-time job" were the dumbest lyrics in a decade that saw the release of Limp Bizkit's "Break Stuff" (not included) and Soul Asylum's "Runaway Train" (included).
Result: Combining a dance beat and blues sample, the song provided a template for Moby to escape his techno doldrums and score a mega-smash with 1999's Play.
Good or Bad: As they'd have said on Wayne's World, the song blew whale.

Artist, Song: Ash, "Kung Fu"
Where and when: Bedrooms of bored, guitar-owning teenagers, 1996.
Significance: Deviating from the Ramones-via-Green Day three-chord formula for pop-punk, similar groups began incorporating arena-rock conventions like hand-clap refrains and hooks you can hang a side of beef on.
Result: Stocked with this kind of band, the Warped Tour eventually became a reliable sold-out show in big venues.
Good or Bad: Good.

Artist, Song: Hanson, "MMMBop"
Where and when: Radio, MTV, and everywhere else, summer 1997.
Significance: This track was produced by the Dust Brothers, who helped set the stage for '70s retro with the Beastie Boys' Paul's Boutique. Here, they swung the pendulum in the other direction.
Result: The Hanson brothers' smash opened the door for far glitzier teen acts, who would deliver mainstream music back to the hands of pop stars.
Good or Bad: Good, if you're glad to hear 'N Sync on the radio; bad, if you'd rather hear Sublime.