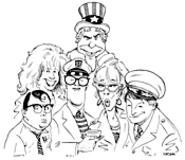 It's one thing to watch Dennis Kucinich on the campaign trail; it's another to write a parody about him. "That was our total bugaboo in the primary season," says comedian Elaina Newport. "[Kucinich] rhymes with spinach, but how do you put spinach in a song?"

Such are the challenges facing the Capitol Steps, the 30-member troupe of ex-congressional workers that has spoofed Washington -- everyone from Presidents to unsuspecting freshman representatives -- since 1981. As Election Day nears, they're taking their last jabs at the candidates: John Kerry line-dances to the "Achy Breaky Heart"-inspired "Fakey Purple Heart," and George W. Bush turns "Ain't No Mountain High Enough" into "Ain't No Surplus Now It's Gone."

Their running mates are easy targets, too: "[John] Edwards is fun because we have a show tune, 'I'm So Pretty,'" explains Newport, who co-founded the group. "He's just too cute for words. And Cheney's got this curmudgeonly death-to-everyone-if-Kerry-wins thing."

The Steps never planned on turning professional. They were brought together by former Illinois Senator Charles Percy to perform a nativity scene at a holiday office party. "Well, that didn't work," says Newport, who left her job as Percy's legislative aide in 1988 to become a full-time Step. "We couldn't find three wise men or a virgin in the entire Senate."

But they did find other comedic wannabes who could poke fun at their bosses and keep their day jobs. "We thought this would come back to haunt us someday," recalls Newport. "We'd be nominated for Undersecretary of Infectious Diseases or something, and the senator would be sitting on the dais and saying, 'Did you make fun of the President in 1981?'"

But it hasn't stopped them. Looking ahead to visiting swing state Ohio, Newport has this to say to voters: "You guys just keep swinging out there."