With Remedy. Thursday, May 17, at the Agora. 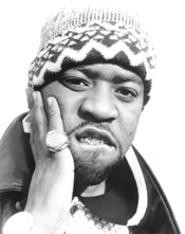 Of all the Wu-Tangers who've released solo albums, Cappadonna is the least assuming of the bunch (he was also the last to join the 10-member group, by the way). And by least assuming, we mean he's the Clansman most likely to be forgotten among the records of Raekwon and Ghostface Killah and the continuing criminal adventures of Ol' Dirty Bastard. His new album, The Yin and the Yang, went pretty much unnoticed when it was released a few weeks ago. And for good reason: Most of the 11 tracks, despite being filled with typical mumble/stumble rapping by Cappa and an overload of guests (he goes truly solo on only one cut) and staccato production from Jermaine Dupri and actual Wu-Tangers, sound as if they were recorded on an afternoon when there was nothing else to do. It's a rush job, even more so than most of the Wu-Tang projects. Unlike Ghostface Killah, whose fractured rapping most resembles Cappa's style and who is capable of tossing off rhymes over similarly splintered beats, Cappadonna doesn't have much personality. He's the Wu most likely to follow the leader and falter on his own. The Yin and the Yang isn't nearly as aggressive as 1998's The Pillage; only "Super Model," featuring the formidable Ghostface, is structured in a way that sounds as if it was planned. Everything is tossed off (including the collaboration with Raekwon, "Love Is the Message," which has potential . . . for about a minute), giving credence to Cappa's claim at the beginning of the album that a little bit of everything is attempted. And it doesn't sound like anything was omitted. Cappadonna's current tour is also a bit disjointed, taking him on a low-key solo trek sure to be heavy on The Yin and the Yang. And without the Wu crew, it all seems pointless.