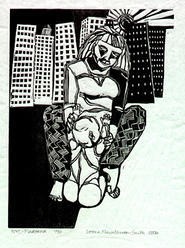 NEW
Soulful Silence -- Printing with wood and linoleum has a long and somber history; just think of the many dark masterpieces by Albrecht Dürer and Käthe Kollwitz. Shaker Heights artist Leena Nevalainen-Smith is a little different. While many of her linocuts here were inspired by 9-11, tragedy isn't the dominant emotion. Apart from effective scenes of pain and paranoia, she also depicts simple joy and innocent humor. There's even the occasional splash of watercolor. Psychological tension and technical accomplishment come to a head in "Yell," a portrait of a man screaming. Thick paper used for contour creates steep valleys in the creases around his furiously clenched eyes and almost tangible texture to the deep furrows in his brow. Further visual depth lies in the muscles of his hand, as he tightly grasps his own shoulder, and in the fine details of his clothing and closely cropped beard. Tone reversal is the featured attraction in "Couple Revealed," in which an androgynous pair huddles in apocalyptic fear. But instead of white on black, their figures are thinly outlined in black against nearly solid white. Thus they appear doubly frail and exposed. Elsewhere, whimsical, colorful pictures of animals brighten the mood considerably, but, as "Nature Hike" proves, Nevalainen-Smith doesn't need paint to be lighthearted. In this black-and-white print, a woman pauses in the forest to take in the beauty. At this moment, however, the texture and design of her clothing match the bark on the trees and lilies on the stream behind her. Beyond merely enjoying the scenery, she's actually part of it. Through January 29 at Loganberry Books, 13015 Larchmere Blvd., Shaker Heights, 216-795-9800, www.loganberrybooks.com. -- Zachary Lewis

ONGOING
All That Glows Is Glorious -- Move over, leg lamps: Here come window displays that are brighter, louder, and more outrageous. Just as Christmas lights are coming down, Cleveland artist Dana Depew has filled Brandt Gallery with a quirky "site-specific illuminated installation" made up of delightfully hideous chandeliers. Intellectual footholds may be scarce, but these gigantic cylinders retro-fitted with lightbulbs, table legs, and outdated fabric are cornucopias for the eyes. And because most hang from the ceiling, they establish a sort of three-dimensional playground with ever-changing vistas. The base of each object is a large fiberglass tank, adorned in paint with Depew's trademark stripes and solid pastels. Additional layers consist of items selectively abducted from 1970s living rooms: clunky sconces and stout wooden table legs, yellow-glass lamps, wrought-iron curlicues, and patches of thinning brown velour. Belts of riveted chrome recall an even earlier era, that of WWII fighter planes and bombs, as do shark-like faces bearing teeth on two horizontal pieces, "Snarvel" and "Babycakes." But electricity is the real focus. Wherever possible, Depew attaches some variety of white or colored bulb (or automobile fog lamp, in one instance), blinking away constantly, emitting warmth both visual and physical. One can't help but think of Christmas decorations -- though another apt analogy is to fishing lures, given each object's manifold parts, perfect balance, and relatively intricate construction. Goofy titles like "Big Bertha" and "Pork Loin" confirm Depew's lack of pretension. Through January 31 at Brandt Gallery, 1028 Kenilworth Ave., 216-621-1610. -- Lewis

Evolution: 1964-2006 -- Forty-two years separate the oldest and youngest works in this retrospective, but Christopher Pekoc's art is fundamentally timeless. Transcending stylistic movements and trendy issues, the renowned Clevelander addresses universal emotions and themes. Much of this stems directly from his chosen media -- old-world materials like gold-colored leaf, as in illuminated manuscripts, paper beaten like leather, and wide, crisscross stitching like Frankenstein's. Painstakingly combining these ancient techniques with modern photography and polyester film (transformed into a yellowish substance like beeswax or amber), Pekoc stands between and above two jarringly different eras. Subject-wise, too, there's an agelessness about figures, body parts, and animals used as emotional allegories. But the apex is "Traversing Erie." Old handwritten shipping logs and photographs of waves printed on rectangular metallic plates form a grid. From a distance, the wall-size image coalesces as two shadowy figures facing each other against shimmering water. Thus, movingly, does Pekoc honor Cleveland, Buffalo, and the storied lake between them. Strangely enough, the image likely to endure longest -- "Kent Triptych" -- was inspired by a specific event, the Kent State shootings. This long, horizontal painting in boldly colored acrylic eschews any realistic depiction of the tragedy in favor of chaotic surrealism: four wet-suited divers (darkly dressed, like police) accost a boy with a microphone in the desert, near an armed man running toward a wrecked car. There's no logical narrative, and nothing makes any sense. But like so many of Pekoc's works, somehow it conveys -- even to those who weren't there -- a quite specific mood. Through January 21 at Convivium33 Gallery, 1433 E. 33rd St., 216-881-7838, www.josaphatartshall.com. -- Lewis

Passione -- Two prominent manifestations of Giancarlo Calicchia's multifaceted personality -- sculpture and painting -- are on display here. They're both fascinating, and together they form an overdue first look at a Cleveland treasure worth wider attention. Calicchia's background as a master woodcarver and stonemason (Calicchia Stone Industries created the Tower City RTA Station) is most evident -- along with forceful artistic sensibilities -- in "Looking Into the Future," a large, craggy bust in rose alabaster. Two faces are stacked vertically, squeezing together from top and bottom; four eyes and two noses combine in vaguely Cubist fashion, one set protruding over the other. This person's literally in two places at once, always ahead of himself, and deep, omnipresent scratches in the stone suggest an uneasy state of being. "Artist's Portrait" is an equally unsettling image in black granite and sandstone. Faces are faintly discernible from multiple angles, while a bulbous, distended cranium rounds out a creature who's formidably intelligent, but also barely human, alien-like. Another unusual medium, Honduran mahogany contains yet another subject in "Invitation to Dinner." Carved into this wall-size panel is a lanky female nude, her breasts and sexual organs spread invitingly, like a table to the world. But a painting represents Calicchia's greatest triumph here: In "The Maestro," a gaunt, oblong face in fiery reds stares with intense, lonely eyes, sitting atop mountainous shoulders, like lava bursting from a volcano. This alone is memorable, but surrounding everything are huge sections of gold leaf. The maestro isn't just passionate; he's also precious. Through January 30 at 1point618 Gallery, 6421 Detroit Ave., 216-281-1618, www.1point618gallery.com. -- Lewis

Trial by Fire -- The highest compliment for these colorful decorative glassworks by sculptor Rene Culler is that one can see how they're made. But that doesn't mean they're obvious. More accurately, they draw viewers into the process behind their construction; all bear traces of the Cleveland artist's craftsmanship without spoiling the mystery of her art. What's clear is that Culler works in layers: Visible within her most intriguing pieces are multiple, distinct strata of glass defined by color or paint. With outer layers generally transparent and edges bumpy, the pieces often evoke objects naturally frozen in ice. Two grid-shaped wall hangings made up of small squares play elegant tricks on the eye. Each tiny component is like a crystal-clear ravioli tightly stuffed with shiny metallic material. Each one is far more intricate internally than it appears, lending the overall piece a beguiling complexity that rewards close inspection. Ditto on a larger scale is a set of six plate-sized medallions connected by looping wire. Embedded within each clear-glass circle are many smaller circles containing freehand dash-and-dot patterns in glittery, earth-toned paint. A giant could rightly pick the whole thing off the wall to wear as a bracelet. Culler's technique is wide enough to include traditional forms, as a case of brightly striped, perfectly finished bowls and vases proves. But the more artisanal, the better. Her densely colorful gong-like piece with a wrought-iron frame is a little rough around the edges, but it must be brilliant in sunlight. Through January 28 at Beck Center, 17801 Detroit Ave., Lakewood, 216-521-2540, www.beckcenter.org. -- Lewis