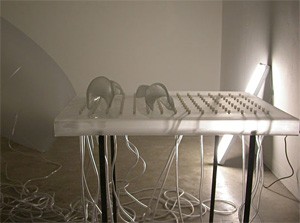 The Formal Absences of Precious Things — Tannaz Farsi's work has presence. It must be reacted to, not merely looked at. Farsi fills the room with oversize, clear vinyl pillows, over six feet tall and four feet wide. As viewers maneuver through the claustrophobic space, four plastic tubes run from the side of each pillow up to the ceiling, attached to a hidden, incessantly droning air compressor that keeps the pillows constantly puffed. Fluorescent lights placed behind the translucent pillows emit an eerie glow, adding to the otherworldly atmosphere. Farsi projects four videos on the gallery wall — nearly still images of outdoor scenes, shot from her apartment. Set off to the side, a pair of disembodied arms and hands, cast in clear resin, rests above what appears to be a control panel covered in dozens of knobs, suggesting that this surreal scene is under the command of some unseen force. The tubes running from pillows to compressor imply a lifeline or interconnectivity. Farsi's mastery of sensory engagement is impressive; the sights, sounds, and sense of space transform the gallery into a sterile area with an unsettling quality. Through April 26 at The Sculpture Center, 1834 E. 123rd St., Cleveland, 216-229-6527. — Theresa Bembnister

Charlene Liu: Recent Paintings — It's difficult to tell by looking, but Charlene Liu's works on paper are an amalgamation of drawing, painting, and printmaking. She uses a process called "chin colle," which involves attaching two pieces of paper together through the pressure of the printing press. Highly detailed and fantastical, Liu's depictions of plant life appear to be drawn from a mishmash of sources — a saltwater fish tank, a desert landscape, a forest floor — and assembled into a single organic entity. Although strikingly beautiful, Liu's work is infused with a sense of putrefaction and spoil. The wet-on-wet painting effect she employs produces circular forms that are surrounded by darker rings of color and resemble spores of fungi or bacteria. Her palette is that of organic matter in decay — mossy greens, bruise-hued purples and blues, and the golden and brassy hues of autumn leaves. Liu's mixed-media work serves as a reminder that things are most precious to us when they are almost gone or in the process of fading away. Unfortunately, there's a little too much white wall left between the separate pieces in this exhibition. Artwork that encourages such intense study and close observation could make room for the addition of another piece or two. But what is on the walls is spectacular and quietly explosive. Through April 11 at Shaheen Modern and Contemporary Art, 740 W. Superior Ave., Ste. 101, Cleveland, 216-830-8888. — Bembnister

Exurbs: A Collected Environment — In this three-artist show, Laura Sanders, Dana Oldfather, and Susan Danko exhibit stylistically varied paintings loosely united by themes and settings exploring mindscapes as well as landscapes. In her "Heads Above Water" series, Columbus artist Sanders paints realistic pictures of children and adolescents swimming outdoors. This subject matter may sound suspiciously precious, but her paintings express a sense of isolation rarely found in images of youngsters. The children fight to stay afloat, gasping for breath as their faces break through the water's surface. In her larger works, Sanders groups boys and girls wading together, but the children aren't playing with one another. Instead, they gaze off into the distance or rub the water out of their eyes. Curiously, in some paintings Sanders includes muskrats swimming alongside the children. These semiaquatic creatures are at home in wetlands; positioning the effortlessly swimming animals next to the struggling children serves as a reminder that these humans don't belong in the water. Self-taught Cleveland painter Oldfather presents a series of prints and paintings starring a sketchily outlined female figure navigating an imagined world of miasmic, abstracted backgrounds. Titles such as "We're Going," "The Long Commute," and "Glide" reinforce her works' sense of journey. Cleveland Institute of Art graduate Susan Danko's flatly painted acrylic works resemble backgrounds from animated fairy tales. The highly patterned forest scenes forgo atmospheric perspective; the layered shapes representing trees, rocks, and shrubbery recede as they go higher up the canvas. Through April 26 at The Bonfoey Gallery, 1710 Euclid Ave., Cleveland, 216-621-0178, www.bonfoey.com. — Bembnister

Sam Taylor-Wood — Make sure you see this exhibition soon. Not only is it profoundly affecting, but it could change at any moment. If there's one point British artist Sam Taylor-Wood makes in this bold, searingly honest photo-and-video show, it's that everything is always in flux. And that includes people, a message Taylor-Wood proclaims with large photo-portraits of crying Hollywood alpha males. Onscreen, all are men of steel, but here we see tender sides, and the contrasts are both surprising and touching. Doubly fascinating: No two sadnesses are alike. Laurence Fishburne stares stoically, ignoring the tears dripping down his face. Daniel Craig, meanwhile, seems disturbed, as if witnessing something painful, while Hayden Christensen, aka Darth Vader, appears bitterly remorseful. Taylor-Wood herself is the principal character in several more pieces. In five photos called "Bram Stoker's Chair," the artist is seen balancing impossibly atop a wooden chair, gracefully defying gravity. They're haunting, balletic images, with her shadows dancing on the wall behind her. The truth in each is the same: She's flying now, but pain is just ahead. But nothing conveys flux more neatly than Taylor-Wood's "Still Life." In this time-lapse video, a bowl of nectarines, the quintessential still-life subject, is seen gradually rotting and molding to the point of collapse. It's a dramatic transformation, actually, and all those endless, static paintings of fruit will never look the same again. Through May 11 at the Museum of Contemporary Art Cleveland, 8501 Carnegie Ave., Cleveland, 216-421-8671. — Zachary Lewis