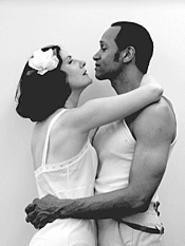 Anna in the Tropics -- Nilo Cruz's play, about workers in a Florida cigar factory, circa 1929, has much to recommend it, including a Pulitzer Prize. But this production by Ensemble Theatre is too loosely performed to capture the essential magic in the script. The central conceit is that the plant's illiterate cigar-rollers are made aware of new and exciting worlds by a lector named Juan Julian, a man hired to read literature to them as they manufacture stogies. In this case, the slick lector is reading Anna Karenina (thus, the title), and a married woman with more than tobacco on her mind starts mimicking Tolstoy's plot by bumping buckles with Julian. This should be a sultry, sexy, and sweaty little piece, but the Ensemble cast, directed by Lucia Colombi, allows too much dead air between the lines while frequently posing and reacting in artificial ways. Jim Weaver is ideal physically as Julian, but he and his paramour, played by Bernadette Clemens, never quite click. Joseph Bonamico has some telling moments as Cheche, a disgruntled worker, but overall this is one cigar that's too damp to spark much interest. Presented by Ensemble Theatre through October 2 at the Cleveland Play House, 8500 Euclid Ave., 216-321-2930. -- Christine Howey Dark Room -- The conventional image we have of playwrights and poets is of lonely souls slaving away in a poorly lit basement. Well, you've got the location and the illumination right, but everything else about the Dark Room project is much cheerier. Sponsored by the Cleveland Theater Collective, it's a once-a-month workshop/cabaret for writers who want to try out their new efforts on a small but extremely encouraging audience. On this night, in a basement room in the Parish Hall at Cleveland Public Theatre, the quality of the pieces varied widely, as is to be expected with scenes or verses that are still being developed (thus, the dark room). But one monologue by Tom Huggins, describing the burnout of nurses dealing with psycho patients in hospitals, was as irreverent and hilarious as a David Sedaris essay. Other offerings, each under 10 minutes, touched on the obnoxious questions asked of "little people," a musical take on holiday haters, and a little girl's imaginary friend, who is a middle-aged Dame Edna type. Reading from scripts (and dragooning anyone nearby to fill out a cast), the writers express, share, and support. And that's a terrific environment for any embryonic artistic endeavor. Takes place the second Thursday of every month at Cleveland Public Theatre's Parish Hall, 6205 Detroit Avenue, 216-631-2727, www.clevelandtheater.com. -- Howey

Dave Gorman's Googlewhack! Adventure -- There are countless ways to waste time on the internet, one of which is to enter a two-word search into Google with the intent of generating only one hit. Dave Gorman, a British stand-up comedian and author, decided to start Googlewhacking one day instead of starting to write a novel, and it sent him off on a side-splittingly funny journey that forms the structure of this show. Delivered engagingly with a rapid-fire pace, aided by witty PowerPoint graphics and grainy photos, the monologue never becomes tiresome, even after two hours. Gorman tracks down the people behind the hits and uses them to generate more Googlewhacks, all in response to a beer-besotted wager with a friend that he couldn't actually meet 10 such individuals before his next birthday. Even with all the laughs, precipitated as much by Gorman's loony intensity as the startling surprises that lurk around every corner of his tale, there are a couple tender and reflective moments that almost elevate the work beyond a slight comic gem. It may be a one-joke premise, but this is a cracking good time. Through September 25 at the Hanna Theatre, 2067 East 14th Street, 216-241-6000. -- Howey

Menopause, the Musical -- Everybody enjoys musicals dealing with energetic young people on the brink of conquering the world. But what about the people in the audience: the nearsighted, overweight, and wrinkled denizens of middle age, who rarely see their own physiological mysteries put into song? For them, there is Menopause, the Musical, a hoot of a show written by Jeanie Linders. It's a foot-stomping 90-minute revival meeting for women who've had to deal with The Change while also trying to maintain their careers and family relationships. Menopause is frequently repetitious, even teetering on the brink of tiresome, but the energetic cast of four and spirited direction by Patty Bender and Kathryn Conte maintain the flow, so to speak. All women with a few decades on them -- even those who only use "menopause" as an excuse to get out of going to football games -- will probably get a stiff neck from nodding in agreement and a tender side from all the laughter. Playhouse Square Center's 14th Street Theatre, 2037 East 14th St., 216-241-6000. -- Howey

Pterodactyls -- Just as shellfish have unique effects on every digestive system, each person has his own response to dark comedies about fractured families made up of determinedly zany individuals. Nicky Silver's latest is a prime example of the clever writing, free-form characterization, and blunt symbolism that mark plays of this genre. Intent on putting the "unction" in dysfunction, Silver performs a ritual sacrament for the death of the modern, upscale family in America. Much of the work rings hollow, but there are many moments that work -- thanks in large measure to director Clyde Simon's brisk pacing and some intriguing performances. As the lush matriarch Grace, Lauri Hammer hits precisely the right notes, ruling this demented roost with the fierce monomania of a control freak on monkey-gland steroids. Jovana Batkovic is also excellent as the tormented daughter Emma. Silver has some interesting thoughts about the folly and transience of life, but his fondness for taking the cute line over telling but less showy character interaction undermines any chance at truly edgy satire. What we are left with is a production that elicits many laughs, followed by a shrug. Presented by Convergence-Continuum through October 8 at the Liminis, 2438 Scranton Road, 216-687-0074. -- Howey