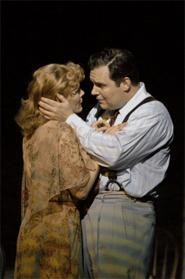 Dark Room -- The conventional image we have of playwrights and poets is of lonely souls slaving away in a poorly lit basement. Well, you've got the location and the illumination right, but everything else about the Dark Room project is much cheerier. Sponsored by the Cleveland Theater Collective, it's a once-a-month workshop/cabaret for writers who want to try out their new efforts on a small but extremely encouraging audience. On this night, in a basement room in the Parish Hall at Cleveland Public Theatre, the quality of the pieces varied widely, as is to be expected with scenes or verses that are still being developed (thus, the dark room). But one monologue by Tom Huggins, describing the burnout of nurses dealing with psycho patients in hospitals, was as irreverent and hilarious as a David Sedaris essay. Other offerings, each under 10 minutes, touched on the obnoxious questions asked of "little people," a musical take on holiday haters, and a little girl's imaginary friend, who is a middle-aged Dame Edna type. Reading from scripts (and dragooning anyone nearby to fill out a cast), the writers express, share, and support. And that's a terrific environment for any embryonic artistic endeavor. Takes place the second Thursday of every month at Cleveland Public Theatre's Parish Hall, 6205 Detroit Ave., 216-631-2727, www.clevelandtheater.com. -- Christine Howey I Love You, You¹re Perfect, Now Change -- Loosely organized around a chronology that extends from a nervous first date to an elderly twosome who meet at a funeral parlor, this collection of sketches and songs pounds away at any number of conventional dating and marital clichés. But thanks to relentlessly energetic and inventive performances by Carousel Dinner Theatre's cast of four, the evening is surprisingly delightful. The two women, Jennifer Swiderski and Holly Davis (an understudy who performed on this night), scored early with a smoky rendition of "Single Man Drought," smilingly lying to their clueless dates and wishing to be somewhere else, to be a lesbian -- to be anything other than stuck with the losers across the table. The boys are every bit their equal: Gavin Esham essays a number of characters with consistent charm and precision, and Mark Sanders delivers the show's best song, "Shouldn't I Be Less in Love With You?," with tender feeling, as his wife of many years keeps her head buried in the morning paper. Through February 25 at Carousel Dinner Theatre, 1275 E. Waterloo Rd., Akron, 800-362-4100. -- Howey

Love, Janis -- Janis Joplin's six-pack-a-day voice and the gentle soul behind it are the undeniable stars of Love, Janis. Based on the book of the same name by Laura, Janis' sister, the play is in effect a full-blown concert, with short interludes that show the singer's quieter and more reflective side. Quoting liberally from the letters she sent home, a more three-dimensional picture of Janis emerges as she fights professionally to avoid becoming "the poor man's Cher." As adapted and directed by Randal Myler, two women portray Janis, one speaking and one primarily singing, to emphasize the bifurcation of her psyche (at one point the icon says, "I gotta go change into Janis; she's upstairs in a box"). Katrina Chester as the singing Janis (she shares the tonsil-ravaging role with Lauren Dragon) embodies the explosive energy and total commitment of Joplin's full-body-contact blues. Even when she's not singing during musical bridges, Chester's "going down" on the bass guitar or dry-humping the drum set, always making love to her music. Amazingly, Morgan Hallett, as the speaking Janis, matches Chester's intensity by stitching thoughts from the singer's missives and remembrances into a homespun quilt of surprising and poignant sweetness. This show is not to be missed. Through February 26 at the Hanna Theatre, 2067 E. 14th St., 216-241-6000. -- Howey

Menopause, the Musical -- Everybody enjoys musicals dealing with energetic young people on the brink of conquering the world. But what about the people in the audience: the nearsighted, overweight, and wrinkled denizens of middle age, who rarely see their own physiological mysteries put into song? For them, there is Menopause, the Musical, a hoot of a show written by Jeanie Linders. It's a foot-stomping 90-minute revival meeting for women who've had to deal with The Change while also trying to maintain their careers and family relationships. Menopause is frequently repetitious, even teetering on the brink of tiresome, but the energetic cast of four and spirited direction by Patty Bender and Kathryn Conte maintain the flow, so to speak. All women with a few decades on them -- even those who only use "menopause" as an excuse to get out of going to football games -- will probably get a stiff neck from nodding in agreement and a tender side from all the laughter. Playhouse Square Center's 14th Street Theatre, 2037 East 14th St., 216-241-6000. -- Howey

Midnight Martini Show -- There is a strange attraction in Frank Sinatra's loosely organized Rat Pack and their infamous, loopily disorganized Las Vegas shows that ran for a few golden years back in the 1960s. Frank, Dean Martin, and Sammy Davis Jr. mixed pop songs, corny jokes, and Johnnie Walker into an irreverent, hip evening that seemed so easy. What the Midnight Martini Show at Pickwick & Frolic proves is that it ain't easy at all. This one-hour set attempts to capture the bored-with-it-all sophistication and the slightly inebriated intimacy that the Rat Packers achieved, but it fails on several counts, from the overly eager performers to the florid songs and lame drinking jokes. Which is not to say that this no-cover show doesn't provide a convenient glide path for those downtown on a Friday or Saturday night. Indeed, some of the American standards are sung well enough. Now the task is to find directors and performers who understand that being casually funny while delivering classic tunes takes a lot of work. Fridays and Saturdays at Pickwick & Frolic, 2035 East 4th St., 216-241-7425. -- Howey

A Number -- Rare is the drama that grabs you by the throat from the first word, then throws you onto a bullet train of emotional, intellectual, and moral issues that doesn't let up until the final curtain. A Number is exhausting and exhilarating, a must-see for anyone who values challenging and richly rewarding stage experiences. Salter is a man in his sixties who once shipped his four-year-old boy off to an orphanage. But first he cloned the child so he could later make a fresh attempt at being a good father. Unbeknownst to Salter, doctors also spun off a number of extra copies of the boy, distributing them who knows where. Now, some 30 years later, the boys are back to confront their father. Written by the fiercely provocative Caryl Churchill and directed with neurosurgical precision by Sonya Robbins, this one-hour excursion into the not-too-distant future features two drop-dead-fabulous performances and more conversational fodder than a month of PBS Frontline documentaries. At its core is the most basic identity mystery: What accounts for who we are, nature or nurture? Presented by Dobama Theatre through February 5 at Pilgrim Congregational Church, 2592 W. 14th St., 216-932-3396. -- Howey

A Streetcar Name Desire -- In the literature of the stage, few characters can match the self-delusion at work inside the disheveled mind of Blanche DuBois, a woman with more flimsy veneers than a dinette store during clearance days. Her pathetic yet hypnotic pathology is once again on display in Tennessee Williams' monument to sexual desire and simple human decency. Due to its many thematic layers and demanding roles, it's a daunting piece for any theatrical company to attempt, but the Play House gives it a respectable showing. Hollis Resnick (as Blanche) and Kelly Mares (as her sister, Stella) exhibit the whip-smart essence of the playwright's language and his insight into characters; even though Stella clearly loves Blanche, she resists her sister's attempts to sabotage her marriage to the brutish lout Stanley (Jason Paul Field). The major weakness in this production is the lack of the passion that should bring a fascinating dimension to the sparks of hostility that fly between Blanche and Stanley. Through February 5 at the Cleveland Play House, 8500 Euclid Ave., 216-795-7000. -- Howey