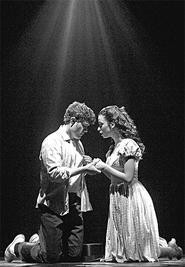 The Unexpected Man -- The finest conversations we will ever experience will always be the ones that happen between our ears. Interior speeches -- perfectly shaped and brilliantly cadenced -- are so pristine, it's easy to see why a writer would be drawn to them. And in The Unexpected Man, playwright Yasmina Reza devotes almost all of her 90-minute one-act to such flights of rhetoric. At times self-deprecatory and occasionally self-revealing, the alternating monologues of two unacquainted passengers sharing a train compartment from Paris to Frankfurt present a juicy challenge for a pair of actors at Cesear's Forum. The two passengers include an elderly gentleman and novelist and a not-so-young woman. She is a faithful reader of his books and recognizes him from the moment they begin sharing their traveling space. However, she does not have the gumption to engage him in conversation. So we hear each of them in turn as they share their thoughts, from the small irritations -- his troubles with the poop shoot, her frustrations with a married potential paramour -- to more weighty matters. Director Greg Cesear keeps the pacing brisk, and the two performances are intelligent and nuanced, bringing out much of the script's intricacies. Glenn Colerider is an elegant silver fox, finding much of the humor in his lines. But he doesn't fully inhabit the persona of a true Euro pessimist. As the woman, Linda Castro negotiates a number of moments with a sly, wounded precision that brings her character into sharp focus. And toward the end, she makes a case for the author's negative slant on existence that he couldn't have phrased better. Even though the welcome final interchange is a bit startling, there's a hollowness that remains afterward. Perhaps that can't be avoided when two characters live most of a play in their own heads. Produced by Cesear's Forum through June 10 at Kennedy's Down Under, Playhouse Square Center, 1501 Euclid Avenue, 216-241-6000. -- Christine Howey. West Side Story -- When it opened on Broadway 50 years ago, West Side Story's leaping, shiv-brandishing chorus boys created quite a stir. The Sharks and the Jets are facing off again at the Carousel Dinner Theatre in a production that, while well short of perfect, has enough telling moments to prevent your four-cheese lasagna from backing up. Playing star-crossed Maria is Stephanie Iannarino, who applies her operatic pipes to the singing chores and crafts a spirited, spontaneous character. Her lover, Tony, is played by Nathan Scherich, a young man who sings a lot better than he acts. As the Romeo and Juliet of this doomed soul match, the two leads never create the musky chemistry that is necessary. Among the prominent gang members, David Villella as head Shark Bernardo is a glowering presence; unfortunately, his counterpart Riff is given a saggy rendition by Matthew Steffens. Julie Kotarides is slim and fiery as Anita, Maria's best friend and sister of Bernardo, and Jonelle Margallo, playing the girl who comes out of nowhere, handles perhaps the best song, "Somewhere," with professional panache. Of course, beyond the central love connection, West Side Story is all about the flow of the timeless music, composed by Leonard Bernstein with lyrics by Stephen Sondheim. The urgently urban score requires a cast that can dance almost nonstop. And here the Carousel players excel, delivering sharply defined dance numbers, whether they're on stage or dashing through the aisles amid the audience. Director/choreographer Marc Robin keeps the pace electric while wisely allowing certain scenes the room they need to play out. This is especially true at the end, when Robin gives the tragic denouement all the space and silence it demands to register profound loss. That concluding scene almost makes up for other lapses in the production, making this Story a flawed but still worthy marker of a wonderful show's golden anniversary. Through June 30 at the Carousel Dinner Theatre, 1275 East Waterloo Road, Akron, 1-800-362-4100, www.carouseldinnertheatre.com. -- Howey