For a hostage and his tormented wife, the same hell in different worlds. 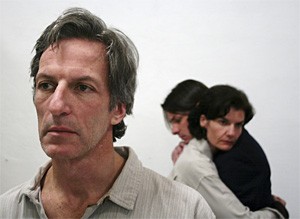 Although hostage-taking in the Middle East has been less of a front-page story in recent months and years, the tensions such kidnappings evoke are never far below the surface. And in Lee Blessing's Two Rooms, now being produced by Cleveland Public Theatre and the Charenton Theater Company, these issues are made starkly palpable.

It's a play with clear political overtones, but thankfully, it resorts to overt preaching only a couple of times. And while two compelling performances keep the work interesting, a lack of depth in a few other characters, along with a poorly imagined set, diminish the play's true potential.

The inhabitants of the two rooms in question are Michael Wells, an American professor working in Beirut who has been taken captive, and his wife, Lainie, who is spending a lot of time back home in her husband's office. She has removed everything from the room except a small mat, to try to share the deprivations and terror Michael is undergoing.

While Michael is almost always alone, Lainie has a couple of visitors: a reporter named Walker Harris, who is cajoling the tormented woman to submit to an interview, and a government functionary, Ellen Van Oss, who wants to keep Lainie quiet, so she doesn't upset the State Department's supposedly delicate negotiations with the shadowy group holding Michael.

Of course, political dynamics have changed in the 20 years since Blessing wrote this script, so it brings some painful ironies to the fore that didn't exist originally: namely, the emergence of one country — not in the Middle East — prone to indefinitely incarcerating and torturing suspected criminals without providing lawyers or trials.

Still, the human and interpersonal forces at work know no geographical boundaries, and these Blessing explores with an elegance and lean poetic grace that belie the subject matter. He often employs metaphors involving birds, since Lainie had been working in a nature preserve.

Two Rooms is a particularly daunting challenge for the actors, since all the characters, except perhaps Michael, are quite multidimensional. The most difficult role is Lainie, and Sarah Morton does a masterful job of balancing her character's loss, hope, and cynicism to fashion a person whose pain can be felt viscerally. When Morton crouches to stare at the mat, where she envisions Michael, her stillness and focus are profound and riveting.

Although blindfolded and handcuffed for much of the time, Jeffrey Grover's Michael is a most believable victim. As he speaks the "letters" he would write to his wife — if only he could — he captures moments in their life together that are sweetly touching. When he ponders how young his captors sound and speculates that "they might have been students of mine," it's easy to feel his frustration and disorientation.

As Walker Harris, the excellent Jason Markouc seems strangely detached, his eyes often shifting away from the action to land momentarily in some vague middle distance. As a result, we don't totally appreciate the tug-of-war between Harris' desire to score a reportorial scoop and his growing affection for Lainie. Also uncertain is Mary Alice Beck, who seems unsure of herself from the start as Van Oss. Since she doesn't use the full power of her office in her initial meetings with Lainie, her later moment of honesty feels less cathartic.

Director Jacqi Loewy creates some real tension as the drama of Michael's incarceration continues to build. But the uncredited set design becomes an unfortunate obstacle. Consisting of bare white walls with a scruffy, scratched-up floor, the single room is used for both Michael and Lainie, but doesn't work ideally for either. He is supposedly moved continually, but his environment never changes. And she is apparently in a barren home office, but there is no evidence of the unused electrical outlets or forlorn picture hooks that would symbolize how her life has been stripped away. A more detailed two-room set or a simple pool of light for both (to allow the audience's imagination to fill in the blanks) might have worked better.

But Blessing's words are superbly crafted, and that's enough to make Two Rooms a production worth experiencing.