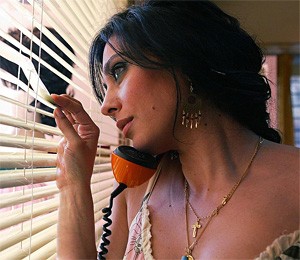 The multiply blessed young Lebanese writer-director Nadine Labaki looks sublimely like Anna Magnani crossed with Penélope Cruz. More important, she has the brass and the chops to not only direct her first film, but also star in it.

In Caramel, Labaki plays a Beirut beautician stewing in a dead-end affair with a married man, while all around her, a multigenerational bevy of colleagues and clients copes with lesbian urges, menopause, and senior dating in a society hostile to all three. The film made the festival rounds last year, including a stop at Cannes, where it received a lengthy standing ovation.

The beauty-parlor romantic comedy has been done to death, but what Caramel lacks in originality is made up for in sensuality and astute commentary, as it tackles the way Lebanese women sit uncomfortably between their country's patriarchal tradition and westernized modernity.

Labaki shows an assured hand with her mostly nonpro actors, who were largely cast for the resemblance between their lives and the women they play. There's more cheek than chic in this Frenchified bit of fluff, but also something deep and poignant about its dilemmas, which include a Muslim bride-to-be agonizing over whether to get her broken hymen stitched in time for a virgin wedding.

Labaki treats her characters with wistful tenderness, raucous practicality, and enough romantic chutzpah to give almost every woman a moment, at least, when she can have exactly what she wants.