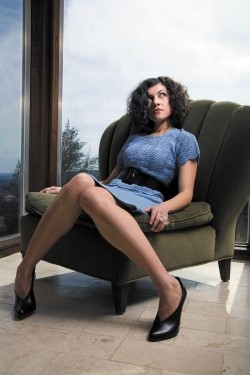 Carrie Rodriguez's evolution as a musician has been impressive, starting with classical violin lessons as a child and an eventual scholarship to Oberlin College. But family friend Lyle Lovett derailed Rodriguez's classical ambitions by inspiring her to transfer to Boston's Berklee College of Music and switch from violin to fiddle, and, in turn, from classical to Americana.

After graduation, Rodriguez returned to her hometown of Austin and hustled every stray fiddle gig she could scrounge. She ultimately came to the attention of legendary singer-songwriter Chip Taylor, who hired her for his band and, recognizing Rodriguez's potential, pushed her to the front of the stage for duets. Under Taylor's mentorship, Rodriguez began to explore her vocal and songwriting abilities, which resulted in three stellar duet albums: 2002's Let's Leave This Town, 2003's The Trouble With Humans and 2005's Red Dog Tracks.

Two years ago, Rodriguez took a tentative step toward a solo career with her debut album, Seven Angels on a Bicycle. The only thing that kept it from being a full-fledged solo CD was the fact that Taylor wrote or co-wrote the bulk of the songs, and performed on and produced the album. Even with Taylor's pervasive presence, Seven Angels was clearly a departure for Rodriguez, establishing her as a rootsy experimentalist in the vein of Jane Siberry, Beth Orton or Patty Griffin.

Rodriguez's latest album, She Ain't Me, could actually be construed as her first true solo work, given Taylor's notable absence from songwriting and performing credits. After a year on the road and several subsequent months to reflect on what she wanted to accomplish on her sophomore album, Rodriguez was ready to expand a bit with her new material.

"Seven Angels was very much a joint project between Chip and myself; it was like doing a solo record with training wheels," says Rodriguez via phone from a Savannah, Georgia tour stop. "Chip helped me with everything from vocal performances to helping me set up a vibe with the band. A lot of times the most important part of recording a song is setting a mood with the band, so everyone's in that mind space together so you get a meaningful performance. I tried to take some of those things I learned from working with Chip into this new project. It was very different in a lot of ways, and not working with Chip was a big leap and very scary, but good. It was really important at this time in my life."

With Taylor out of the loop as a co-writer, Rodriguez did more primary writing than she's ever done in the past and sought out a number of high-profile collaborators to assist her, including former Jayhawk Gary Louris, former Son Volt bassist Jim Boquist, former Semisonic frontman Dan Wilson and renowned singer-songwriter Mary Gauthier among them. Each brought a unique element to Rodriguez's process and finished product.

"Dan and Gary were two guys who I've been a fan of for years, but I didn't know them at all," says Rodriguez. "My record label helped hook me up with them. I just showed up at Gary's house with my fiddle and guitar; I had no idea if it was going to work. But the second we sat down and started playing music together, it was like we'd been doing it for years. We could sit in the same room and not even talk for two hours, and just scribble on note pads and then say, 'Show me what you've got.' I felt totally comfortable doing that with him."

Rodriguez's session with Wilson (whose work with the Dixie Chicks earned him a Grammy) was more problematic. Because of scheduling, she had only one day to work with Wilson and that day happened to fall after a South by Southwest all-nighter. Exhausted and hung over, she showed up at Wilson's door to begin work on what would become the title track of the new album. "We had a strange day," says Rodriguez. "You know when you're almost hallucinating because you're so tired? But out of that, some really cool, creative things came. We didn't finish the song until a couple weeks later, via Internet. One day, I wrote a bunch of verses, and he called me the next day and sang me what he thought should be the chorus into my voicemail. And we had our song."

The extensive touring that Rodriguez did for Seven Angels also contributed greatly to the sound of She Ain't Me. Early last year, she put together a band, including guitarist Hans Holzen and bassist Kyle Kegerreis, and the chemistry the trio concocted onstage since Seven Angels' 2006 release carried over to the recording of the new album.

"Being out on the road with my band for the last two years, we've taken what we started with Seven Angels and brought it to a more rock place in a live situation, so that was present on this new record," says Rodriguez. "I think it sounds a lot more like what I do live than Seven Angels. I've never been able to make an album with the band I work with, so that was a luxury. That's why it was so great to record with them for the record." Another important component of She Ain't Me was producer Malcolm Burn, whom Rodriguez met while touring with Lucinda Williams last year and whose work with Emmylou Harris and Chris Whitley had already attracted her interest. "I listened to everything he had to say before I got in there and got bossy," says Rodriguez with a laugh. "He's kind of a rock 'n' roll guy. He had me playing my fiddle through an amp into a microphone. I've always tried to get the best mic possible to record the violin and make it sound as natural as possible. And he had me put effects on it, which I think helped it blend into the overall sound of the record better. It was much more rock 'n' roll than anything we'd ever done."

With acclaim deservedly rolling in for She Ain't Me, and Rodriguez getting ready to embark on a band-less solo jaunt in Europe, it would seem the student has finally flown free of the mentor. And yet, Rodriguez doesn't discount the possibility of working again with Taylor, the man who pushed her to front of the stage.

"I hope so," says Rodriguez wistfully. "We did a brief tour in Holland last year and that was fun. He just put out a book; I haven't read it yet. He had me write some things for it, but I haven't seen it yet. He's busy. I think he's put out three or four records in the last six months. I hope we find the time to do a tour, which might inspire some more songwriting and maybe more recording."

Rodriguez acknowledges she wouldn't be making music if it weren't for Taylor.

"I wouldn't have thought of even singing, honestly, and certainly not songwriting," she says. "When we were making our second duet album he said, 'I want you to be more of a partner than a sideman in this project. No matter what you have, bring me something and let's see what we can do.' I do miss playing with Chip, and I hope we do something. You've made me want to call him."