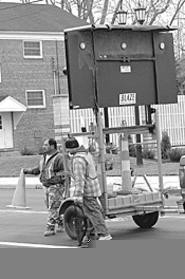 Who knows why Ferris Kleem tried to build a railroad embankment out of mud? The only person who knows is Kleem, and he's not talking. The whole idea was crazy. Kleem's company, Blaze Building Corporation, won a $21 million contract to build a railroad underpass in Berea. The project called for Kleem to dig a deep trench that would run Bagley Road under the tracks, then to build a bridge for trains to travel overhead.

The bridge required a solid foundation on both sides to support the weight of the trains. But instead of dry dirt, Kleem tried to pack the embankment with mud. "You can't do that," says Joe Byrne, engineer for Gannett Fleming, the company hired by the City of Berea to oversee the project. "The minute you put any weight on it, it just mushes up and squirts out."

Kleem tried anyway. Predictably, the mud mushed and squirted. So Kleem suggested replacing the mud with dry dirt. He also suggested that Berea and the State of Ohio pay for it. "If you want to try something on your own, that's your decision," Byrne says. "But we're not going to pay you for something that didn't make sense in the first place."

Byrne denied the request even before Kleem put it in writing. But that didn't stop Kleem from trying other ways to cut corners and get paid for it. Residents in Berea have complained for years that Kleem uses his political connections to win construction contracts. That he underbids to win, then tries to fatten the contracts with costly and outlandish changes. That he does low-quality work, and does it slowly ["Rags to Rip-offs?", March 17].

Now that Blaze has completed the railroad project and another on Berea's main strip, it appears that Kleem's critics have been right all along.

Kleem's bid for the first phase of the Bagley Road underpass looked fishy from the start. Four other companies said the phase would cost between $3.9 million and $4.1 million. But Kleem said he could do it for half a million dollars less than anyone else. "His numbers were way out of the ballpark," Byrne says.

Kleem promised he could cut costs by using dirt from another construction site. Instead, he used dirt from phase two of the project, for which he had not yet won the contract. He even managed to get paid extra for this self-serving arrangement. "We had to pay him twice, once to move the dirt and store it off-site, and again to move it back," Byrne says.

Next, Blaze tried building the bridge. But it couldn't get the support columns right. Some were a few inches too high, some a few inches too low. "That was a big screw-up," Byrne says. Workers used shims and plug welds to make the bridge deck fit. Now, every time a train passes overhead, it puts pressures on the steel that the bridge wasn't designed to handle. Byrne says the bridge is safe for now, but adds, "It'll just have to be monitored regularly for fatigue."

Between screw-ups like this and Kleem's pulling workers off the site to work elsewhere, the project was completed four months late. Some of the delay was attributed to bad weather and other unforeseen problems, but Byrne and the City of Berea believe that Blaze is responsible for 63 late days. Since the contract charges $2,500 for each day that Blaze missed the target completion date, Berea says Kleem owes the city $157,500. "I withheld that money, and now it's his move," says Berea's mayor, Joe Biddlecombe.

When it comes to problems with Blaze's other current project in Berea, however, the mayor seems strangely agreeable. A mile east of the new bridge, the city decided to build a tree-lined median down the middle of Bagley Road that would slow traffic and beautify the entrance to the city. Blaze Building Corporation won the $1.7 million contract and hired the Cook Paving & Construction company to do the asphalt work. The job was completed in November, and problems were immediately obvious. The road's surface ripples in waves. The top layer of asphalt has many different textures, and there are large stones in the seams between the lanes. These mistakes make the road highly susceptible to water seeping in and freezing during the winter, which will cause the surface to crack. "It's horrible," says Al Troietto, Berea's city engineer. "I was very angry."

Though Cook did the work, Blaze is responsible. "They were the project managers," Troietto says of Blaze. "If they felt there was a problem, they should have flagged it and had them redo it." Troietto listed his concerns in a November 29 memo to Mayor Biddlecombe. The problem, he wrote, "was caused by poor construction practices, workmanship, craftsmanship and substandard machinery."

But two days later, Biddlecombe professed himself satisfied with the project. "It's pretty nice," he said. "Sure, we're not done with it yet. But I'm not unhappy."

For the last five years, Berea politics have been bitterly divided on the question of whether Ferris Kleem wields too much power over the town. In this tense environment, Biddlecombe's praise for a flawed Blaze project plays into the hands of his critics. (Biddlecombe received $9,985 from Kleem and his business partner, John Mayer, during his first three years in office.) "The mayor is entirely bought and paid for by Ferris Kleem," says Jim Webster, a longtime Kleem critic.

But other actions by the mayor suggest that he's not in Kleem's pocket. Biddlecombe refused to accept donations from Kleem during his reelection campaign in 2003. Portions of the asphalt on Bagley Road will be stripped off and redone, Troietto says, and he's adamant that the contractors will cover the costs.

Most important to Kleem's survival, however, is the question of late fees. Companies that finish projects late have a difficult time getting insurance. And without insurance, they can't win contracts. If the mayor succeeds in his quest to keep the late fees, Biddlecombe may hit Kleem in the contractor's weakest spot. "Biddlecombe is the first guy to stand up to Kleem," says Byrne. "Normally, this guy gets everything he wants."