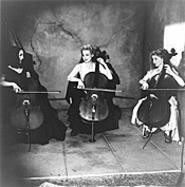 Once upon a time, there were three cellos who needed three women to play them. Since the age of nine, the girls had toiled to hold their fingers against the strings and gracefully stroke the bow across them, back and forth, just so. Nearly two decades later, the three women looked at their prodigal talents and decided that they could not tread where other cellos have gone before, down into the orchestra pit with the tubas and the oboes.

And so the women founded the Ladies' Cello Society in the City of New York, and it did come to pass that the three arranged their chairs in a semicircle, with a drummer boy behind them, calling themselves Rasputina. Never before had the music world encountered such a creature, clad in Victorian lace, corsets, and flowing rings of curls. The music was menacing, dark, and full of twisted humor. No one had seen or heard anything quite like Rasputina before, although some who witnessed their jubilant recitals were heard to mumble "Gothic!" or "Vampires!" under their breaths.

"No, oh no!" cries Kansas-born Melora Creager, the main cellist, singer, and spokeswoman for Rasputina. In order that listeners might become better acquainted with her mission, Creager now speaks into a telephone from her New York City apartment, explaining that this simply is not so. Fairy tales and fantastical allegory, she explains, are her true inspiration: The Chronicles of Narnia, not Nosferatu. "I was really into collecting books," she says. "I had all the Nancy Drew, all the Little House on the Prairie.

"I think the goth thing is kind of campy, but there are loyal, passionate people involved in it, so it's not something that I want to knock. But it's also a ghetto, where people will pigeonhole you with a strict set of rules, so I'm not really into that side of it. But it's creative. People get all dressed up in crazy costumes, and I'm into seeing them."

How comes it, we ask, that Rasputina is such a feminine entity? Cannot the sturdy hand of man conquer the cello with equal force?

"Well," says Creager, "it's the same size as a person, and it looks like a woman's body. And when I'm playing, I feel like I'm one with it and it's a part of me. I don't want to diss the guy players -- there are some great ones. But I think there could be an affinity there with females."

The abundant fruits of Rasputina flowered, the scent finally reaching the lofty castle of Sony Music's verdant pasture called Columbia, where the overseers saw fit to collect an assortment of Rasputina songs and issue them as a sampler known as Thanks for the Ether, released in 1996. It was not like any other music before or since, but it was scary, beautiful, precious, and dark, and sometimes it set souls to grieving.

"The cello -- so beautiful, so sad," muses Creager. "Some argue that the violin is sadder, but I think they're mistaken."

The songs -- about supermodels, twopenny salt licks, dead babies, old actresses, Howard Hughes, and roller skates -- charmed many who heard them, including the black prince himself, Marilyn Manson. Not only did the Antichrist Superstar deign to remix the ladies' song "Transylvanian Concubine" for maximum nastiness; he also invited them upon the road as his esteemed guests of honor. But the minions who came to welcome the prince saw fit to pelt the Rasputina cellists with rocks, bottles, and garbage. Creager, normally pleasant and kind, became an ogress who introduced songs not with amiable patter, but with a serpent's tongue. "I had to be yelling at the audience, to get them to pay attention or to put them in their places."

'Twas two summers later that the Columbia lords did pluck more Rasputina offerings for a delightful assortment called How We Quit the Forest, by which time Creager had exchanged two of her attendants. A maid of Poland named Agnieska Rybska replaced third cellist Carpella Parvo, who had run away into the woods. This time, Chris Vrenna, a drummer boy liberated from the dark prince's entourage, helped produce the record with the pyre of a blast furnace, plus the industrial roar of guitars and pounding percussion. Rasputina continued to perform recitals across this continent and that, opening for more compatible artists, such as the Cranes.

For the next five winters, Rasputina subsided into slumber. During this time, assistant principal chair Julia Kent set forth, down her own path. The blood contract with Columbia Records was rent asunder. And Creager found herself heavy with child. But still she bestowed her talents upon much-deserving traveling troupes such as Belle & Sebastian, bringing her own chair and cello along, just as she had done in the past with the Pixies and, most famously, Nirvana.

"There were plenty of spineless bastards, working on the periphery, who caused them a lot of problems," she recalls of the Nirvana adventure, "but it was really neat. Of course, there was a lot of sad and bad stuff, but those guys are really nice people. And Kurt was a really nice person."

But as it came to pass, Creager would spend the next few years at home, tending her new baby, knitting embroidered booties, and writing and recording new songs. Two new ladies, K. Cowperthwaite and Nana Bornant, brought more than 30 years of collective cello experience to Rasputina, and yet another drummer boy was discovered. Thus, the recitals began again in earnest, with Creager never failing to introduce the songs in a most unserious tone, jesting about Crisco enemas, urine quaffing, and uterine plugs, and ridiculing celebrity targets such as Mary Kate and Ashley Olsen of Full House fame.

"Generally, with the celebrities that I become obsessed with, I lose interest when they become a joke on The Tonight Show. Now that the twins have their magazine and they're truly ruling show business, I don't have anything to say about them anymore," she says.

Celebrities are fair game on 2002's Cabin Fever!, the third Rasputina record, a treacherous and complicated work that takes occasion to lob unpleasantries at Björk and Polly Jean Harvey. Still, the scratching, scraping, grating, screaming, and oft-disturbing Rasputina sound remains intact. This time, supernatural chamber-rock oddities such as "Gingerbread Coffin" come to the fore. Difficult meters and odd, diaphonic harmonies abound, while mechanized noise creeps insidiously into "Rats" and "AntiqueHighHeelRedDollShoes." On the gentle "Our Lies," Creager's voice sounds bigger and fuller than ever before, which she attributes to childbirth and corset-wearing.

Earlier this year, Rasputina issued a previously internet-only album called The Lost and Found, a covers collection including Led Zeppelin's "Rock and Roll," Pink Floyd's "Wish You Were Here," and Nico's "All Tomorrow's Parties." Rasputina is back on the road. So Rasputina dances onward, alone. To date, no one has dared to try absconding with the group's secret formula.

"It is so hard, and the rewards are so small, to do this group," Creager says. "Just to find three cello-playing girls who are willing to do it is really difficult. I think that's why it's never copied!"