The grass is greener when the Chieftains are around. 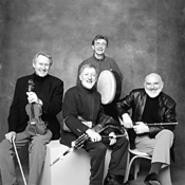 There's a tribute to Derek Bell in the Chieftains' current stage show. After the Irish band's longtime harpist died, following surgery in October, the remaining quartet never questioned whether the show would go on. It just would. So while the tour to promote Down the Old Plank Road: The Nashville Sessions is dedicated to Bell, there's little time for mourning.

"He was like a member of the family, and it's heartbreaking," says founder, leader, and uilleann pipes and tin whistle master Paddy Moloney. "But he always did the opposite of what he was asked to do.

"He would be across the table from me having a coffee, and I'd be telling him, 'There you go again, putting six or seven sugars in your coffee. You know you shouldn't be having sugar,'" Moloney continues. "And he'd say, 'It's OK. It's brown sugar.' This is what he did to himself. But I do miss him."

So it's time to move on, and there's work to be done. Like hitting the road for the 41st time in a four-decade career. Pop cellist Caroline LaVelle (who has played with Peter Gabriel and Radiohead, among others) is sorta filling in for Bell. "There are plenty of great harp players around, but rather than have a harp for this occasion, just sitting in there, I wanted to go a different road," Moloney says.

Released a month before Bell's death, Down the Old Plank Road is a sequel of sorts to 1992's Another Country. The basic tracks were recorded in Nashville, with help from country folk, including Vince Gill, Lyle Lovett, Patty Griffin, Earl Scruggs, Ricky Skaggs, Alison Krauss, John Hiatt, and Gillian Welch. The result is one of the band's most celebratory -- and celebrated -- albums. "I needed to dig a little deeper and come up with songs that are even closer to our music," Moloney says. "Of all the collaborations we've done, this is the most natural. [Country] is so close to our music. My pet name for this is the Greengrass Project."

Theme records are nothing new to the Chieftains (who are nominated for a pair of Grammys this year; they have six of them already). Among the group's several dozen albums are collaborations with the Rolling Stones, Sting, and other rockers; a work featuring only female vocalists; dips into Latin music; an entire project with comrade Van Morrison; soundtrack compilations; and, of course, plenty of traditional Celtic music.

"It's just a great joy getting into this," Moloney explains. "And these joys are natural -- just sitting down, playing, and having a great time."

The Chieftains have brought country chanteuse Allison Moorer on tour with them, extending Down the Old Plank Road's hillbilly concept. Moloney says they even have a bunch of half-recorded tunes left over from both Nashville sessions during the past decade that they want to finish and release soon.

"There are a lot more songs out there," he promises. "I want to concentrate even more on pure bluegrass and make a closer connection to Irish music."

Oh, Danny Boy, where art thou?