A local writer makes a (Cedar) point with his new book. 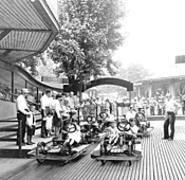 A roller coaster isn't just a roller coaster to David Francis. And Skeeball isn't just an opportunity to blow $17.50 on a chance to win an oversized Bugs Bunny. Nope. To Francis, co-author (along with wife Diane) of Cleveland Amusement Park Memories, Ferris wheels, arcade games, et al. are barometers that gauged the sociopolitical climate of the 20th century. "Amusement parks broke down ethnic barriers," he says. "They allowed people to mix more freely. And they cemented labor relations, by bringing management and labor together."

The book methodically details the racial and class obstacles that amusement parks crashed through during their peak years. More important, it gives a photo-filled history of all the local parks that existed in the 1940s through 1970s. "Amusement parks bring all sorts of venues together under one roof," observes Francis. "There are rides, food, games, and movies. It's a smorgasbord of entertainment."

And Francis's own memories helped fuel the nostalgia. "I grew up in the Cleveland area," he says. "I spent a lot of time at Euclid Beach." The Francises discuss and sign their book at noon Friday at the Cleveland Public Library, 525 Superior Avenue. Admission is free; call 216-623-2821. -- Michael Gallucci

When your dad is the world's most famous supervillain, you really get tired of hearing about it. Cleveland filmmaker Johnny K. Wu dramatizes that pressure in his short film A Joker's Card, in which the son of Batman's notorious nemesis, the Joker, struggles with his identity. "A few friends and I were watching Teen Titans on television, and we talked about doing another wire-fu work," recalls Wu, who previously worked with gravity-defying, Matrix-style martial-arts action in The Chase. Joker Jr.'s idea of rebellion is to attend college and skip the whole mass-murder thing. But after one bad day too many, he sets his sights on Nightwing, the superhero formerly known as Robin. And despite all the vengeance and teen angst, the film doesn't get too heavy, notes Wu. "I enjoy the campy '60s Batman TV show," he says. "So I incorporated some of that too." A Joker's Card premieres at the Grid/Orbit (1437 St. Clair Avenue) at 7 p.m. Friday. Admission is free; call 216-623-0113. -- D.X. Ferris

Big Babies
Karamu takes a look at a child's world through adult eyes.

Ray Allmond says that Thornton Wilder's Infancy is an "obscure piece" that's rarely staged. Maybe that's because of the play's man-sized twist: Two mothers are pushing baby buggies in the park. As the women compare notes on raising kids, their sons pop up from their strollers. "The babies are played by two full-grown men in oversized carriages," explains Allmond, the show's director. "While their mothers struggle with the complete lack of understanding of the needs of their 'tiny' offspring, the babies try to make sense of this crazy world they've arrived in." Infancy is at Karamu House's Annie Mae Theatre (2355 East 89th Street) 2 p.m. Saturday and Sunday through May 8. Tickets are $6; call 216-795-7070. -- Cris Glaser

Guerrillas in the Midst

Patty Hearst's story is one of the 20th century's most fascinating. Guerrilla: The Taking of Patty Hearst, an equally fascinating documentary, chronicles the tale of the newspaper heiress who was kidnapped in 1974 by a group of revolutionaries calling themselves the Symbionese Liberation Army. Hearst, who claimed that she was brainwashed, eventually collaborated with the SLA. The movie screens at 7:30 p.m. Friday and 9:55 p.m. Saturday at the Cleveland Cinemathque, 11141 East Boulevard. Admission is $8; call 216-421-7450. -- Michael Gallucci