Change for the Better

Feed the meter, then feed your appetite at Lee Road's Yorkville Café.

March 09, 2000
comment
Andrew Putz can be reached at andrew.putz@clevescene.com. 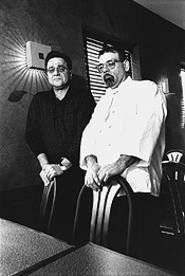 The warning conveyed by the little black letters was succinct: "This parking meter is enforced twenty-four hours a day, seven days a week. NO EXCEPTIONS!"

Welcome to Lee Road, where winter restaurant dining can mean endless circling through half-plowed municipal parking lots, skating across slippery sidewalks, and interrupting a meal hourly in order to feed a ravenous meter.

A pain? Yes, indeed. But who knows, maybe the inconvenience is just meant to whet the appetite for the comforts to come. If that's the case, the plan worked perfectly during a recent visit to the Yorkville Café, a casually sophisticated spot that opened last summer, when the parking was easy.

Coming out of the cold into owner Mike Ina's pretty little restaurant is much like sliding into a warm bath of appetizing scents, colors, and tastes. With its walls washed in saturated shades of pumpkin, paprika, mushroom, and cream, and the air laden with the aromas of garlicky roast chicken, simmering lamb shanks, and rosemary-bedecked pork chops, the restaurant immediately revs up diners' appetites with fond memories of savory home-cooked meals.

Admittedly, these recollections of home are probably most authentic for those who come from a large family, because the Yorkville Café is a busy, bustling place. The long, narrow dining room, separated from the bar by a glass-topped wall, is jam-packed with sleekly designed, granite-topped booths and tables, a condition that, on a crowded Saturday night, can make intimate conversation problematic and expansive movements all but impossible. Still, the lively atmosphere is energizing and, despite the constant turnover, service is typically well-paced and reasonably attentive.

Ina and Chef Victor Gentile collaborated on the menu, which is remarkably comprehensive despite its modest size, and includes a satisfying selection of appetizers, salads, sandwiches, pizza, pasta, and entrées that range from a platter of fire-roasted vegetables to a juicy grilled pork chop, and from deep-fried oysters to housemade manicotti. Pasta dishes and entrées come with a simple house salad of mixed greens, shredded carrots, and croutons, in a basic vinaigrette, as well as a breadbasket filled with slices of tasty Orlando Bakery breads. Large portions are generally well-seasoned and flavorful, and with a full meal averaging less than $30, sophisticated diners will find it a solid value. In similar fashion, the wine list is an appropriately short but sweet compendium of mostly familiar Californian names with unassuming prices to match.

One of the most memorable dishes we've sampled at the Yorkville was the first thing we tried, an appetizer of five huge, deep-fried oysters. Thoroughly cleaned, meltingly tender, and seriously succulent, the big guys wore a thin, crisp coat of golden breading and were backed up by a lemon wedge and a bit of roasted-tomato-sweet-corn-and-fennel relish. My companion -- a devoted diner with a passion for shellfish -- says she is still enjoying sweet dreams about those oysters, which she insists were some of the best she has had north of New Orleans.

On another visit, my party shared an eight-slice pizza as a starter. It was hard to choose between the five alternatives: everything from a pure-and-simple-sounding version, with roasted garlic, four cheeses, olive oil, and rosemary to a rich roast duck, artichoke, marinated plum tomato, and garlic creation. We finally settled on one with mild, lean Italian sausage, roasted red and yellow peppers, a dab of thick marinara, and a blanket of creamy aged Provolone cheese on a crisp, yeasty crust. Reasonably light but full of flavor, the pizza would have also made a nice entrée for a single diner.

A meal-sized salad of mixed greens and scallions, ringed by juicy slices of fresh orange and sweet grape tomatoes, and richly topped with shreds of moist roasted duck and crunchy duck-skin cracklings in a well-balanced apple-cider vinaigrette, was also a refreshing alternative to a meat-and-potatoes entrée. Not that there is anything wrong with the "comfort food with attitude" main dishes that Gentile and Ina serve up. In fact, a massive lamb shank, cooked to falling-off-the-bone tenderness and served on a bed of basmati rice pilaf, was simply divine. The big shank had been braised, then simmered for hours in a spicy pinot-noir reduction sauce before being smothered beneath a layer of finely chopped vegetables and seasonings including garlic, carrots, onions, celery, tomatoes, and rosemary -- a robust enhancement that soared right off the top of the taste charts. In fact, the dish made such a great meal that we readily forgave the kitchen for undercooking an accompanying serving of green beans, which seemed to have enjoyed only a brief warm bath before making their tableside debut.

Also excellent was a thick Grilled Pork T-Bone Chop, finished with a touch of intensely flavorful cranberry-rosemary demi-glace. The chop, cooked to a "medium" degree of doneness, was still plenty juicy, although its exterior provided a wonderfully smoky crunch from the grill. It came sided by chunks of roasted red-skinned potatoes, some buttery carrot sticks, a smattering of crisp sugar-snap peas, and a bit of tart, sweet-and-sour red cabbage.

Likewise, the Pan-Roasted Half-Chicken was redolent with the aroma and taste of fresh lemon, thyme, garlic, and chives, with its crisp skin a pleasant counterpoint to the tender meat within. The chicken was served with three thick slabs of firm but thoroughly cooked grilled sweet potato, and the same carrots, pea pods, and red cabbage as sided the pork chop.

An entrée of skewered and grilled shrimp and scallops on fluffy basmati rice, mixed with bits of chopped scallops and a combination of roasted red and yellow peppers, scallions, carrot threads, and pea pods, was lighter than the other entrées we had sampled. But what it lacked in rich overtones, it made up for with its fresh and wholesome taste. The four shrimp and four scallops had been gently handled and came to the table properly cooked and delicious, and the veggies were obviously attentively prepared.

In fact, the only main dish that was less than entirely satisfying was a portion of Housemade Manicotti: four crêpes stuffed with a creamy filling of ricotta, spinach, basil, and a bit of sharp goat cheese, and topped with thickly sliced, grilled portobello mushrooms. The downside was the acidic, out-of-balance tomato sauce that covered the pasta. It was all I could do to keep from sprinkling a packet of Sweet 'n' Low over that mouth-puckering red sauce, to try to sweeten it up. But, happily, this proved to be the singular sour note to come out of the Yorkville kitchen.

As for sweets, the restaurant offers a selection of three or four "imported" goodies each evening, including options like chocolate mousse cake and raspberry cassata cake from Sweetheart Bakery in Northfield Center, which is operated by Ina's European-trained brother-in-law. Assorted cheesecakes from Slices, a Cleveland concern, also appear regularly. We took a chance on a big slice of Caramel-Walnut Cheesecake and had no regrets. The dense, creamy cheesecake was slathered with a thick and buttery caramel sauce and a sprinkling of chopped nuts, and was entirely yummy without tasting overly sweet or, as is much too common, as if it had been languishing for days in a cooler.

A nervous glance at our watch as we ended our meal confirmed that it was just about time to slip a third coin into the old parking meter. We threw back the last slug of decaf, dutifully struggled into our parkas, snapped on our crampons, and whistled to our dog team hitched outside the door. "Mush, Balto," we commanded as we turned the sled toward the tiny parking lot situated three chilly blocks away. "There's no time to spare! Our dinner is over, the meter's run out, and when it comes to vigilant parking enforcement in Cleveland Heights, the law never sleeps. NO EXCEPTIONS!"

Note: Ina assures readers that most metered parking spots, including those in the lot immediately next door to the restaurant, are free after 6 p.m., and dog sleds are seldom if ever needed.