Howie Day has filled out his sound, and so far he's still filling clubs. 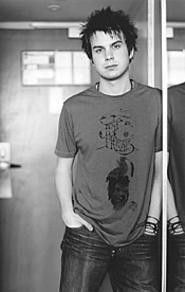 The tangible appeal of college rockers is based on the way their musical personalities reflect the lifestyles of their core listeners. Indie, punk, and noise mavens flying high on the CMJ charts possess a scruffy, unconventional charm, much like that of their fans, stumbling to 10 a.m. class in pajamas.

Singer-songwriters represent the same kind of familiarity, albeit on a more mainstream, soccer-mom-sanctioned scale: John Mayer is the hunky frat boy, perfect for having a secret crush on; Dave Matthews is the aging alum who shows up to party during Homecoming weekend.

What these disparate approaches have in common is accessibility. The lack of buffed-up pop pretensions means that fans are just as likely to be roommates or drinking buddies with any of these bands as they would be members. Acoustic-oriented songwriters also create personal connections, with heartfelt confessions articulating the same feelings and emotions that their listeners experience.

Such is the immediate appeal of Howie Day, a 22-year-old whose sparse 2000 debut album, Australia, had the intimate atmosphere of a heart-to-heart conversation between dorm mates. During a September interview, the laid-back Day -- calling from his hometown, the "huge metropolitan area" of Bangor, Maine, as he says dryly -- doesn't sound very different from any other bored college kid looking for entertainment in suburbia.

"We were going to go play miniature golf yesterday, and it was closed," he laughs. "I was like 'Come on, it's like 75 degrees outside, it's beautiful,' and this place was closed, 'cause there's just nobody here, except in the summertime. You play a big city, and anything you want to do after the show, you can go do it. But here, it's like 'Want to go to the movies? You want to go out to eat?' 'Cause that's about it."

What's not mundane about Day is his meteoric rise to stardom. A guitar whiz who began playing solo in clubs at age 15, he became known for his impassioned vocals and extensive use of samplers, delays, and other gadgets, which added layers of harmony and countermelodies to his skeletal acoustic sound. He cultivated a rabid fan base from relentless touring, especially in the Northeast ("There are so many colleges [there], and we played, like, all of 'em," he laughs); devotees consequently spread the word of his dynamic shows via the internet and extensive trading of live bootlegs. Self-financing the recording of Australia, Day sold a staggering 30,000 copies independently, before Epic signed him and re-released it in 2002.

While addressing the same themes of romantic love, longing, and regret, Stop All the World Now, his second full-length, is a giant step forward. Day recorded Now in London, working with producer/Killing Joke member Youth and ex-Verve bassist Simon Jones, among others.

Their influence gives Now a distinctly British chime. Rich piano drives "Trouble in Here," while shimmering bits of keyboards and percussion dot "Sunday Morning." "Come Lay Down" ends in squalls of tortured riffs, vocals, and electronic effects reminiscent of Radiohead's "Paranoid Android," while Day's anguished, ragged howls Bono-fy the U2 upsweep of "You and a Promise." "Collide" and "I'll Take You On" even feature needling strings with the grandiose scope of the Verve's "The Drugs Don't Work."

"The first record was somewhat of a shoestring budget, completely do-it-yourself," Day explains. "This one, we obviously had the major label behind it and the opportunity to bring in the orchestra and all that posh stuff. Youth had done [the Verve's] Urban Hymns, and I was a fan of that record -- it had that vibe where there was orchestra all over it. I thought, 'Wow, that would be cool, to go for something like that, a big-sounding record.' And some of the songs really seemed like they would take to it, so it was just another thing we did."

To those used to Day's stripped-back sound, Now is definitely a shock. The third night of his current tour, which also features him backed by a full band for the first time, demonstrated the mixed reactions toward his new direction. Playing to 2,000 people at Boston's sold-out Avalon Ballroom, he was greeted by camera flashes to rival a paparazzi blitzkrieg and screams like "I just sold my psychology book to see Howie Day!" There was also enthusiastic applause for new songs such as Now's soaring lead single, "Perfect Time of Day."

But Day drew the most cheers for a midset solo interlude, during which he played older tracks "Ghost" and "Sorry So Sorry" with his usual array of guitar gizmos. Whether the response came thanks to fans' familiarity with the tracks or simply because they prefer Howie solo remains to be seen. But Day anticipated the crowd's response to the fleshed-out sound.

"Fans have a thing that they do, where any change is bad," he laughs. "But ultimately, that's just their initial reaction. Fans stick by the artists that seem to reinvent themselves and are constantly changing. That's how you last as an artist and keep yourself and everybody else interested. If you do the same thing over and over -- you just kind of spin out, the wheels spin."

But Day's more lush sound and crowded stage setup haven't changed him. His unassuming plaid shirt and shock of electric-charged spiky hair make him as approachable and low-key now as he was before he had beaucoup label bucks supporting him. And as the lavish-but-grounded-in-reality Now proves, Day is still like a comforting, platonic best guy friend -- always there to lend sage advice and an understanding ear, with boundless and genuine empathy.

"Recording the record in England might make it sound English, but the songwriting is still very much me," Day explains. "[It comes] from the place where I live and who I really am, and my friends and family around me. It was good to be in that place while I was writing.

"When someone comes up to me after a show and says, 'Oh, you know, I cried,' it's like 'Really? Wow, that's really cool.' So that's the ultimate goal, I guess, to go out and move people and put out a record that can take them back to that show, that they can listen to over and over again."