Cobra Starship: Better than Snakes on a Plane. 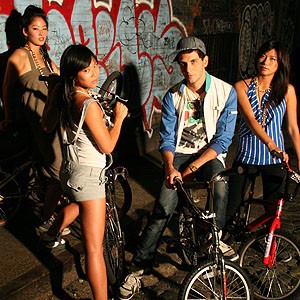 It's just a coincidence that Gabe Saporta formed Cobra Starship right around the time all that internet buzz started for Snakes on a Plane. The frontman for the New Jersey emo band Midtown wanted a side project that was "more lighthearted than the stuff I usually do." What he got was a hip-shakin', wall-rattlin' launchpad in "Bring It," Snake's theme song, which opens with Samuel L. Jackson's immortal "I've had it with these motherfuckin' snakes." "I had no idea what the movie was about when I wrote the song," says Saporta.

On Cobra Starship's debut album, While the City Sleeps, We Rule the Streets, which comes out next month, Saporta and pals (including members of the Academy Is . . . and Gym Class Heroes) soar through a set of funky tunes designed to get emo kids dancing. "I wanted to make a record that was about being young and in love in the city," says Saporta. "It's all about the party — and the after-party."
Thu., Sept. 21, 7:30 p.m.