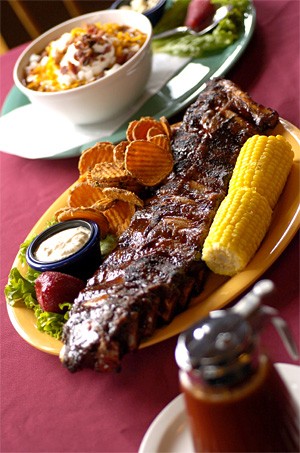 Whatever other problems Jim Malkus had, he knew how to make food.

In 2005, the veteran chef with the demeanor of a southern gentleman and the body of an overripe peach opened the Grill Fish restaurant in Tremont. The place was a dark 40-seat establishment. Sunlight slid in only when customers opened the front door. And though the menu featured items like thick, blackened grouper sandwiches and oysters Rockefeller — which critics deemed among the best in town — the restaurant was largely empty.

After six months, Malkus decided Cleveland wasn't into crustaceans. Barbecue was the ticket. So he transformed the space into a Texas-style barbecue joint, serving chunky chili and baby backs smothered in a rich chocolate sauce. The reviews remained glowing, and customers remained sparse.

The place would last but a few months.

Going broke twice in quick succession would leave most chefs down. But Malkus, a Florida transplant with an inexhaustible supply of optimism, bounced back quickly. It wasn't long before he and partner Renie Thompson, a short, delicate man, came up with a new plan.

Forget Tremont. The real money was in Twinsburg, where they'd open a warm, nautical-inspired place and serve fresh-off-the-boat walleye and hearth-baked bread. The two fell in love with their vision, and their passion was infectious. "They totally believe everything they're telling you," says Roger Kepford, Malkus' former landlord. "So you have no other choice than to believe what they're saying is the irrefutable truth."

Malkus and Thompson approached Dawn and Ryan Caito, who owned a cozy space that used to house the Millsville Inn on Ravenna Road. The landlords were feeling panicked: Their tenant had bailed, and they had no other prospects. Malkus entered the breach.

"He painted such a wonderful picture," a person close to the negotiations says. "He talked about turning $2 million in one year, and how he had all this start-up capital."

The Caitos were so drawn in that they neglected a thorough background check, which would have revealed a long trail of angry creditors, unpaid vendors, and bounced checks. "This guy's one of a kind," says Thomas Mason of the Twinsburg police. "A real charmer."

Almost as soon as Malkus opened The Lobster Trap, the Caitos discovered their error.

The reviews were once again gushing — "meaty, messy, and delicious" — but Malkus was conspicuously absent at rent time. When he did write checks, they inevitably bounced. And when the Caitos called the electric company about gas bills, they learned that Malkus had illegally tapped into another business' line.

But Malkus was full of excuses, which largely centered on the Caitos. They were stealing food from him. They were harassing him, he claimed. None of the stories made sense. "He was like a little kid, building lie on top of lie," says Jeff Fisher, a former business associate.

A short while after the Caitos confronted him, Malkus bolted, reopening The Lobster Trap in a new location — right across the street.

Roger Kepford owned the vacant building, which once housed a strip joint. Malkus needed a bigger space and planned to renovate the place into a large dining room.

It all sounded good to Kepford, who lived hours away in Marion and would rather tend to his marigolds than hunt prospective tenants. He'd eaten at The Lobster Trap. "The food sure was good," the landlord recalls. And Malkus "talked a good show." So he leased the place with little investigation. "It was probably stupid on my part," Kepford admits.

That's when Malkus elevated his game from deadbeat to flat-out fraud. He drew up fake documents, claiming to be the owner of the building, then leased space to seafood importers Cindy and John Dziorney. "We had no idea the extent of his lies," a wide-eyed Cindy says now.

Last August, the Dziorneys opened John's BayLobsters & Seafood market. Residing next to The Lobster Trap would make for a symbiotic relationship, they believed. But it would quickly evolve into a one-sided affair. The Dziorneys provided Malkus with tens of thousands of dollars in fish. Malkus repaid them in bounced checks.

Meanwhile, Malkus got busy selling Kepford's bar equipment, left over from the vacated strip joint. He auctioned off big screens, a sound system, stage lights, and more on eBay, pocketing more than $40,000.

Kepford didn't notice until a friend tipped him off that Malkus was thinking of relocating yet again. So the landlord made a surprise visit from Marion. "Imagine my surprise to find tenants I didn't even know I had," he says.

When he confronted Malkus, the chef started crying. He told Kepford he'd spent so much money on the renovations that he needed quick cash. "He acted like I should feel sorry for him," Kepford says. Instead he called police.

"This is the kind of thing you hear about, but until you actually deal with a case like this, you don't believe anyone like this actually exists," says officer Mason.

Malkus was able to run the same scam over and over because he understood the landlord mind-set so well. In crumbling Northeast Ohio, where busy streets have more vacancies than a five-year-old's teeth, people are desperate for tenants. "In general, anyone who owns a business now that's vacant starts to panic a little," Mason says. So when they encounter a charming, seemingly successful chef, they leave their better business instincts behind.

In December, Twinsburg issued a warrant for Malkus' arrest, citing seven counts of fraud. But by the time they arrived at his apartment, Malkus had already fled, leaving behind boxfuls of unpaid bills and creditor notices.

A few weeks later, they received a tip as to Malkus' whereabouts. He was on West 117th, renovating a new restaurant.

The guy, it seems, never learns.