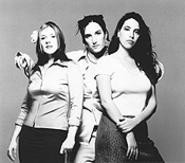 Given that her band's name is borrowed from a 1960s pro basketball player, Philadelphia 76er Lucious "Luscious" Jackson, it should come as no shock that guitarist Gabby Glaser watched the 1999 NBA Finals with interest. Glaser is a New Yorker and a Knicks fan. The Knickerbockers, unlikable underachievers throughout the regular season, made an improbable run to the Finals, where they bowed quietly to the San Antonio Spurs.

Glaser, though, is philosophical about the Knicks' defeat, because she knows basketball. Discussing the Finals, she not only refers to a star like David Robinson but also the Spurs' lesser-known point guard, the scrappy and smiling Avery Johnson. "My friends get mad at me when I say this, but I liked the Spurs, too," Glaser says. "The Knicks had a great season, going to the Finals from the number-eight seed, so they have nothing to be ashamed of." It was the Spurs' play and deportment that won over Glaser. "They were just so humble and unmacho."

Hidden forces seem to be watching out for the Knicks, and for most of its existence, serendipity has smiled on Luscious Jackson. In 1991, the same year Glaser and Jill Cunniff cut their first demo, they opened up for the Beastie Boys and Cypress Hill in New York City. Impressed, the Beasties (especially Mike D) signed Luscious Jackson to their fledgling label, Grand Royal, and released the EP In Search of Manny.

Though both are native New Yorkers and met in the clubs of Manhattan years before either was old enough to drink legally, Glaser and Cunniff made the demo while living in San Francisco. After high school, Glaser attended the School of Visual Arts in New York, studied in France, and then landed in the Bay Area at the City College of San Francisco. Cunniff was going to Berkeley and waiting tables to pay the bills. "Jill is one of those people you feel comfortable with," Glaser says, describing their relationship. "You have friends who you just hang out with, friends who you run around with. She and I have always done stuff together."

Their "stuff" was usually ambitious. Before turning the tapes on themselves, one Cunniff-Glaser project was a documentary of Bad Brains, the influential East Coast hardcore/reggae band. Not much film was shot. Glaser says that she found it too hard to be nosy. "Maybe they're not in the mood to be interviewed," she says of her subjects, "and you're sitting there, like, "Soo, what have you been listening to?'"

In Search of Manny came out in 1992, and it couldn't have been a better year for Glaser and Cunniff to emerge. The Beasties, with the release of Paul's Boutique and Check Your Head, were now a credible outfit, not the lunkheads who made the first rap album for white jocks. Alternative and hip-hop acts were kicking hair bands in the codpiece. Female musicians were allowed to let down their weasel bangs and write songs about screwing a guy over instead of being the one who got screwed. In Search of Manny spoke to all of this and was recognized as the EP of the year by The Village Voice. They rocked, they rapped, they noodled on weird instruments. What was not to like?

Good fortune kept following. Glaser and Cunniff rounded themselves out with Kate Schellenbach, who drummed with the pre-Licensed to Ill Beasties, and keyboardist Vivian Trimble, who left the band last year, citing tour fatigue. The band released its first full-length album, Natural Ingredients; opened for R.E.M.; and played on Saturday Night Live.

The esteemed Daniel Lanois produced the next record, 1996's Fever In, Fever Out, out of which came the minor Top 40 hit "Naked Eye." Their good looks and clever sound made them a natural for the Gap's disquietingly hip, musician-on-white-background campaign.

Trailblazers, unfortunately, usually find themselves on the business end of the blaze. Admiring Luscious Jackson — even though the band members play, sing, and write better than before — has become antiquated, like rockers wearing cardigan sweaters and Keds, à la Kurt Cobain. That's too bad. Electric Honey, Luscious Jackson's latest, may not be groundbreaking, but it's damn good. Cunniff, the principal songwriter, has embraced her thirties and said that you can be mature without growing old. Glaser, on her songs, balances Cunniff's kitchen pop with a strobe-light sultriness. It's a soothing, adult record — just the kind they should have made at this point in their career, though probably not one that will stir the estrogen of college-age Lilith lovers.

Before recording Electric Honey, Cunniff studied opera and Glaser, on a whim, took voice lessons in Miami. It shows. The early '90s Luscious Jackson could get by on lazy raps. Now Cunniff sings beautifully, and Glaser, while not an immensely gifted vocalist, makes up for it with confidence. She admits she isn't working on her lessons as she should. "I'm such a schmuck about stuff like that," Glaser says. "Maybe when the tour is over, I'll pull out the tapes."