Students are stars in the Marilyn Bianchi Kids' Playwriting Festival. 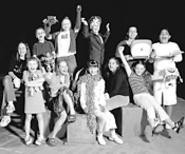 The fourth-grade playwright, sitting grammar-school upright in the front row, squirmed in delight as, onstage, Mom explained to her son Jake that there was nothing to eat for breakfast. The girl bounced delightedly in her seat, as she heard her words gushing out in a guttural German accent from Jake's sadistic schoolteacher. And when the family dog Sparky, played by an adult human, sat attentively to listen to Jake's lament about The Worst Day of My Life, Sparky and Jake's creator was clearly transported.

This was the scene as Pamela Denish, a student at Albion Elementary, felt the heady rush of seeing her own script come to vibrant, astonishing life. As one of the 25 award winners in this year's Marilyn Bianchi Kids' Playwriting Festival -- and one of the lucky 10 whose plays were produced last weekend -- Pamela encountered a joy few adults (let alone children) ever experience. Witnessing your words come to life theatrically is truly magical; to give children this experience was one of the goals when Dobama Theatre launched the festival 25 years ago as a tribute to Marilyn, who had passed away in 1977.

(A personal note: In the interest of full disclosure, I should state that I was a friend of Marilyn Bianchi and her late husband Don, and was a member of their Dobama Theatre family from 1969 to 1984. Since I acted in 23 productions, all directed by either Don or Marilyn, and directed five plays at Dobama myself, I am less than objective when it comes to the Bianchis. Don was the most brilliantly [and compulsively] creative person I have ever known, and Marilyn, along with her impressive multiple talents, had a smile you could feel across a room -- and very likely across time and space.)

After Marilyn's untimely death from breast cancer at age 45, a group met to devise a memorial, and a kids' playwriting contest emerged as the perfect idea, since Marilyn had spent many of her years -- especially her last five -- bringing the excitement of theater to children. And so, the festival was born. Even though this year's productions are now history, you would be well advised to save next year's date (sometime around early June) and encourage any grade 1-12 writers you know to submit their plays for consideration.

This year, as every year, there were numerous comical and tender highlights. Where else but at the Marilyn Bianchi Kids' Playwriting Festival would you see onstage:

A dog named Spot and a cat named Mittens, all without a whiff of post-modern irony (courtesy of third-grader Angie Holecko).

A turtle, rabbit, and fox trying to help pull out a loose tooth (plot by Henry Hoffman, first grade).

A treaty among all countries that they be friends forever. Attention, George W.: You could learn something from fourth-grader Max Schlessel.

A creepy take on the probing curiosity of parents (Why do they ask all those questions?), by seventh-grader Ayla Cash.

In addition, there was a cryptic peek into the pain of losing a husband and father, written by fifth-grader Vaughn Spurrier; a prince and princess who find happiness as their real selves (frog and snake, respectively), authored by third-grader Kiarra Houston; and a funny mom-son personality switcheroo, by fifth-grader Peter Minidis. Perhaps the most completely satisfying play in the lower- and middle-school category was Alone With My Mom, by seventh-grader Anna Ferry. This remarkably insightful portrayal of a daughter's journal entries, addressed to her deceased mother and written at four stages of life, was wise far beyond the playwright's years.

But the writers weren't the only young stars at the festival. Max Chernin was all trembly as the dweeb Alvin, who gets picked on by scary Psycho Sam, played with a sneer and a strut by Willie Brown. Michael Danner suffered splendidly as the aforementioned Jake. And little Isabelle Hammer was eerily on-target as icy Queen Elizabeth. All these child actors benefited from the guidance of adult directors; this blending of the generations, in a shared project of creation, is another of this event's cornerstones.

But the key to the festival's success is the immense respect shown to the children whose plays are selected. The scripts are produced as written, without any supposedly knowing changes by the grown-ups. Certainly the adult actors and directors contribute creatively, but they simply try to embellish the work that the students have crafted. And that sends a profound message all its own: While we are busy instructing our children, we must also stop, listen, and learn from them.

If you feel a tingle, that would be Marilyn. Smiling.