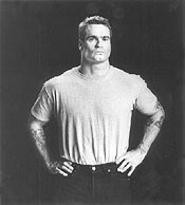 "All journalists and critics are ants at the picnic," Henry Rollins declares from the offices of his L.A. publishing company, 2.13.61. "I'm not curious to see what you write about me. Not curious about any review about anything I do. I don't care. And I defy you to stop me. I would be loath to read anything about me by someone who wasn't there. I'm not gonna see it their particular way -- me, having been there."

"I like communication, and I like the idea of the interview," he says. "But I don't enjoy being taken out of context. Usually people are cool with me, 'cause I think you get what you give. I'm always respectful and try to give good, clear answers and basically write your article for you. I do every interview that's put in front of me. I'm doing five hours of phone press today."

No stranger to venting his personal unease, the 41-year-old Rollins seems to do every project that's put in front of him, as well. He was the ferocious mouthpiece for pioneering hardcore outfit Black Flag, as its fourth and final frontman; he also founded the Rollins Band and has sat confidently behind the wheel of his own company truck since 1986, the same year he launched a successful solo career as a spoken-word artist.

Since then, Rollins has parlayed his menacing presence into films both notable (1996's Lost Highway) and noxious (1998's Jack Frost). When Nikki Sixx of Mötley Crüe passed on the chance to make a cameo in last year's box-office hit Jackass: The Movie, Rollins filled in, recklessly driving a Hummer through a motocross track while stuntman Steve-O bounced around in the backseat. Plenty of commercial voiceover work -- a far cry from his days making porn with Lydia Lunch -- also helps keeps the tattooed colossus busy: Rollins mouths car commercials and spots for Life cereal and SPC Specific Broadband; he even does "an on-camera thing" for the Partnership for a Drug-Free America.

"I've always been against drugs," Rollins says. "That's how you destroy yourself: You take drugs." He also debunks the popular notion that he's an overcaffeinated coffee achiever: "A cup a day. That's about all I've ever drunk."

As one of the founding fathers of America's hardcore-punk movement, today's version of Henry Rollins poses more than a contradiction for rabid fans from the days of yore, when news of a warehouse show was spread by word of mouth, or by spray paint on a highway overpass. Now you're more likely to see Henroid making a guest appearance on The Drew Carey Show (joining the cabal of the "TV Party" that he once mocked so effectively) than rattling the cage of a world he can't stand. But work is work. Rollins has surely paid his dues, having lived out of vans, scrambled for pennies on the gig, and clawed his way to get where he is. Exuding hypermacho excess and something he calls "the courage to allow myself to be stuffed and mounted," Hank certainly knows the value of a good zinger.

"If you've ever seen the first seven minutes of The Dennis Miller Show, where he just goes off, that's what I do," Rollins says of his current stand-up routine. "It's everything from the last movie I was in to the thing that happened to me in traffic the other day to my theory that Donald Rumsfeld is the new Henny Youngman."

Rollins's own past is perhaps less of a joking matter. Well before his current incarnation as a paid social commentator, he cut off contact from his divorced parents and reinvented himself as a punk legend. Following a hard-ass upbringing at the all-boys Bullis Academy for problem kids, a Ritalin-addled only child born with the name Henry Garfield discovered rigorous self-discipline.

Rollins caught his break in 1981 when Black Flag's third singer, Dez Cadena, handed him the mic to sing "Clocked In" at a show in New York. Soon after, Rollins replaced Cadena, and along with guitarist Greg Ginn, bassist Chuck Dukowski, and one of several rotating drummers, he put SoCal on the map as ground zero for the American hardcore scene.

Rollins's tour diary, Get in the Van, chronicles the era in blunt, graphic language ("I bit a skinhead on the mouth and he started to bleed real bad," reads a typical passage), and set the course for the cocksure singer's literary pursuits: writing brutal prose in the name of destroying the system, making sense of it -- or at least satirizing it somehow.

For Rollins, staying guardedly playful in the age of terrorism and imminent war seems like just another day on the soapbox, raging until he's hoarse. With his "tumultuous teens, turbulent twenties and therapeutic thirties" out of the way (that's how Rollins sums up three decades of his life on his official website), what can Mr. Angry look forward to in his 40s?

"Probably a receding hairline, increased bitterness and bile, and a layer of ass-fat I'll be unable to get rid of," Rollins replies. "Yeah, that'll be me. Just kind of Volvo-drivin', lookin' like Alan Alda, wearing those kind of have-no-sexual-ambition kind of pants that you can buy at Banana Republic. I can get laid, but of course I'll have to go to the ATM. You never know. I'm just postulating here."

Does Rollins ever think that he takes himself too seriously?

Does Rollins ever, in the dead of night, wonder if he's sold out?

And now the burning question: How much can Rollins bench press?

"For the true measure of real strength," he says, "you never ask a guy what he benches. If you want to call him out, ask him what he dead lifts or what he squats. That's the real strength exercise. That's where you shit your pants and scream."

"I just do an occasional push-up now and then," I confess.

"Well, I know. You act like it," Rollins snaps. "But when you get in touch with strong mind/strong body, you might see things differently. And who knows? You might get laid."