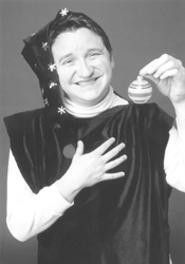 Those who are hard to please claim that Sam, the Talking Yuletide Bass with his Christmas wiggle (batteries not included), doesn't ring their holiday bell. Others, who depend on sugarplum fairies to get into the holiday spirit, are drowning their sorrows in spiked eggnog, because The Nutcracker has departed for a warmer climate.

Yet the big day is 11 days away. In the meantime, debauched holiday revelers stagger the streets looking for an entertainment to express their Yuletide cynicism.

And Santa has come through. The perennial madcaps at Bad Epitaph Theater Company have appropriated Cleveland Public Theatre and turned it into a haven for holiday kitsch. Here, assembled under one roof, is everything to make a John Waters Christmas, from the glowing plastic statue of a jolly old St. Nick to rambunctious Christmas cowgirls waiting to mount bucking reindeer. Over the loudspeakers, Alvin and the Chipmunks blare out falsetto holiday wishes, while the audience scurries for seats around a replica of one of those cardboard gingerbread houses familiar to anyone who ever had a picture taken with Mr. Claus.

This giddy scene intoxicates the incoming spectators, putting them in a reverie of childhood greed. Visions of discarded Easy-Bake Ovens and GI Joes dance through their heads. Just as they are on the verge of breaking into a round of "I Saw Mommy Kissing Santa Claus," out pops one Curtis D. Proctor, who bears a startling resemblance to Bea Arthur's Maude. He commences a full-bodied dramatization of David Sedaris's first-person short story "The Santaland Diaries" with the aplomb of Julia Child whipping up a fruitcake.

Sedaris is a literary star out of public radio. His writing brings to mind the warm, urban wit of Patrick Dennis (Auntie Mame). Like Dennis, he casts himself as a wisecracking observer in a maelstrom of oddballs.

The Santaland Diaries is Sedaris's consumer passion play of a tumultuous Christmas season spent in Macy's Santaland as Crumpet the Elf. The play and short story subtly capture the nuances of greed and vulgarity spawned by the holiday season. This is the dark flip side of Miracle on 34th Street. The lesson is that Santa Claus is a befuddled, out-of-work actor, and there isn't a shopper -- parent or child -- who isn't ruled by cupidity and egotism. In its second season, it is already developing a cult following.

Proctor's mobile face seems to be molded from pudding. It changes texture and color with each mishap: explaining to a dubious personnel director, "I wanted to be an elf because it was one of the most frightening of job opportunities"; mis-signing to a frantic deaf child that "Santa has a tumor in his head the size of an olive." Proctor reaches the apotheosis of elegant Rosalind Russell bitchiness when he expounds upon his unrequited love for Snowball, a fellow elf. Even in his polyester elf togs, he is able to take on the air of a wised-up torch singer. In the realm of Christmas shows, here is a much-needed martini amid the eggnog.

One of the major faux pas in Dickens's original A Christmas Carol is that, after taking all the trouble to learn the error of his ways, old Ebenezer doesn't get his ex-girlfriend restored to him. He may win the affection of merry olde London and a passport to heaven, but as we close the book, he is left with only a little boy on his shoulders and no one to fill his empty arms, which all seems like a hollow victory.

With the Garry Sherman/Philip Rose/ Peter Udell Christmas Is Comin' Uptown musical, Karamu has rectified this problem. Here, in this '70s Harlem update, the slumlord Scrooge's maladjustment is symbolized by a lime-green leisure suit, and his ultimate reward is to spend Christmas Day truckin' on down the avenue with his rekindled old flame.

Karamu's 2000 season has had more false starts than a busted jalopy. Only now, with its two high-stepping holiday extravaganzas, has the theater been jump-started back into vivid life. On Fridays, Saturdays, and Sundays is that perennial crowd-pleaser, Black Nativity, in which a very pregnant Virgin Mary plies her way back to Bethlehem. On Mondays, Tuesdays, and Wednesdays is that little-known but vibrant '79 musical of Scrooge and company doing their Dickens thing in Harlem.

Twenty-one years ago, Broadway critics tossed this show into the garbage can with the old gift wrappings. Now it seems as frolicsome as a beach party. Here Scrooge, played with rough gusto by Bryan Jones, positively relishes his evil ways. His team of supernatural reformers has more sass than the Four Tops. S.J. Hannah's Ghost of Christmas Past is a platinum-blond Muhammad Ali look-alike. Joyce Linzy's Ghost of Christmas Present is a jazzy jogger. Best of all -- and a vast improvement on the original -- Glenn Alexander's Christmas Future is a cross between Little Richard and Mae West. The most inspired idea is that everyone is backed up by a Supremes-like girl group.

Technically, the show seems drastically under-rehearsed, but director/choreographer Reggie Kelly has the knack of infusing everything he touches with charisma and snap.