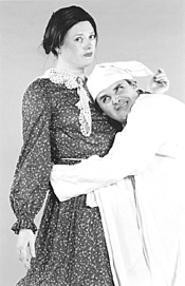 So you've donned your crimson sweater with the sparkly snowman appliqué, the aroma of fresh-baked sugar cookies is wafting out of the kitchen, and you're primed for some delightful holiday entertainment. Well, how about a twisted version of Dickens's A Christmas Carol, in which long-suffering Bob Cratchit's wife, Gladys, is a chronically depressed and suicidal drunk who keeps most of her 20 children locked in a root cellar, and Ebenezer Scrooge doesn't learn a damn thing and winds up even meaner and wealthier than he ever dreamed. And here's the kicker: With all its satirical twists and outrageous turns, Mrs. Bob Cratchit's Wild Christmas Binge, now at Cleveland Public Theatre, has more heart than a 24-hour marathon of Jim Brickman Christmas specials.

Playwright Christopher Durang knows his way around parody, and in this exuberant work, he's rammed Dickens's didactic masterpiece about the evils of greed headlong into other iconic tales, such as It's a Wonderful Life and Oliver Twist. The splendid creative carnage that results is thoroughly and quite intentionally chaotic, with Enron's Ken Lay and Jeffrey Skilling making a sleazy cameo appearance, selling California-style "energy units" to Ebenezer, who, true to the CEO code, adroitly passes on the costs to his hapless employee, Bob Cratchit. The Ghost of Christmas Past is unable to make her spells work, so she beams herself and Scrooge into the wrong house. Inside, we find the hopelessly dysfunctional Cratchit family, with lame Tiny Tim (given a wide-eyed, hilariously plucky rendition by Dan Kilbane) crumpling piteously to the floor every few seconds and father Bob (a deliciously clueless David Hansen) constantly fetching home foundlings he discovers on doorsteps, like an eager golden retriever. Then there's Little Nell, who works in a sweatshop and eats nettles so that she can afford to wrap empty boxes to give to her unappreciative family.

We're used to the Cratchits sweetly enduring their multitudinous miseries, because poor people are supposed to be above complaining (that's class warfare, remember?), but Gladys is fed up. All she wants is a couple of snorts at the local pub, then a half-gainer off London Bridge into the frigid water of the Thames. But thanks to the powers of the Ghost of Christmas Present and Clarence, the angel-intern from It's a Wonderful Life, Mrs. C finds herself magically back in her hovel, dripping wet and monumentally pissed that her suicide was foiled. Of course, Clarence (the woozily daft Jeffery Steven Allen) dutifully shows her how life would have progressed had she not existed (hey, he figures, it worked with George Bailey). But the cascading surprises that ensue from that point on are exquisitely appropriate and unfailingly amusing. By entwining the similar time travels of Scrooge and Gladys, Durang purees these beloved holiday chestnuts into a richly satirical pudding.

As Mrs. Cratchit, venomous Meg Chamberlain snarls at her pathetic family with brio. (When Tiny Tim doesn't notice something on their scraggly Christmas tree, she acidly comments, "What, are you blind as well as crippled?") Michael D. Sepesy is a marvelously pinched and puckered Scrooge, whether he's forcing Bob Cratchit to repeatedly hit himself in the face (some on-the-job discipline) or licking the boots of his soulmate, Gladys. Taking on the juicy role of all three ghosts, Nina Domingue is trapped in a strange, falsetto, quasi-British accent as Christmas Past, but she hits her stride later, allowing some street cred to seep into her personality. Also excellent are Elizabeth R. Wood, Douglas A. Kusak, Michael Regnier, and Liz Conway, who together etch a dozen rollicking, memorable characters. And let's not forget the dandy child actors -- achingly innocent Dan McCarthy as young Jacob Marley, Kevin C. Ritter as the precociously cynical Scrooge, and Will Crosby and Lori Sommerfelt as the Cratchits' abused but at least above-ground children.

This inventive production keeps its attitude sharp, with Gladys repeatedly noting that she can't stand Little Nell's appearance, telling the fragile girl, "Your face looks like a bowl of oatmeal." And this is one mom who won't abide sentimentality: When Tiny Tim croons out his love for her, she snaps, "Shut up, you're just hungry!" Under the tight and imaginative direction of Randy Rollison, everything is made fun of, including a squeaky proscenium curtain and the supposedly drunken accompanist (Michael K. Seevers Jr.), who glumly sips a martini while glaring at the audience before the show and between acts.

But the most impressive achievement is that Mrs. Bob Cratchit never feels mean-spirited or tiresomely ironic. In fact, when this talented cast joins hands and presents the final song, you feel like joining in with the Cratchit family. When it comes to singing talent, they're no von Trapps -- but they're one hell of a lot funnier and, in their perverse way, much more real.