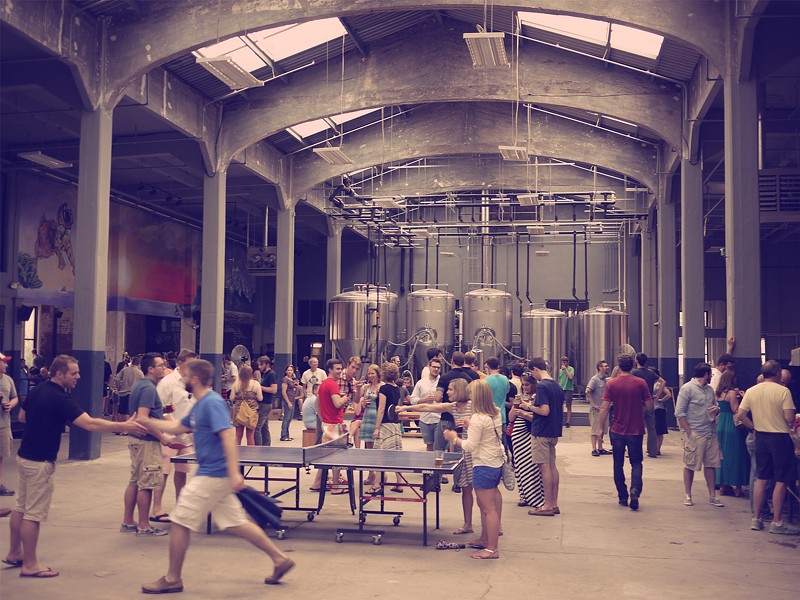 In all, 52 neighborhoods make up Cincinnati, aka the Queen of the Midwest. Each has its own distinct texture and history, and while, as is said about many Midwest cities, Cincy is experiencing a resurgent cultural boom, the truth is the devotion to the arts, excellent food and coolness has always been there in those neighborhoods — it's just taking a moment to be noticed by outsiders.

Which is a good reason to take the four-hour jaunt down I-71 this summer. There's plenty to explore, and yes, the chili is optional.

Stretch your legs at the expansive and urban Smale Riverfront Park. Bonus: It serves up views.

The park is a mile-long stretch along the banks of the Ohio River, with lush gardens, patio-style swings that face the river (perfect for cozying), an giant interactive keyboard (play with your feet — it's on the ground), an oversized chess board, a carousel, a playground for the kiddos and more.

Just beyond the aforementioned carousel, you'll see the iconic, fuchsia "Sing the Queen City" sign; if you're looking for a snap for the 'gram, it'll serve you well. Walk a little east and you'll likely wander into Sawyer's Point/Yeatman's Cove park. More gardens. More trails. More fresh views. Plus, this space is where many signature events take place, like summer's Bunbury Music Festival.

Head across the John A. Roebling Bridge, which celebrated its 150th anniversary last year, that connects Cincinnati to NKY.

Roebling Point, as its name suggests, is walking distance from the other side of the river. Make a Covington pit stop in one of the area's coziest cafes, that sort of feels like the cottage of a hobbit who really likes to read. Every spare inch of wall space is filled with bookshelves, and there are plenty of couches, tables and window seats spaced throughout to unwind in, cuppa joe (and book) in hand. Need a snack? Get it here. Need a book for the ride back? Definitely get it here.

From Smale River, the Contemporary Art Center is a 20-minute walk. Open until 9 p.m. on Fridays, this space rotates exhibits frequently, so there's always something new to catch. Make sure to head upstairs to the Unmuseum, a creative space with interactive art to let off steam and feel like a kid again.

Right across the street from the art center is Nada, a great taco and cocktail joint. Chill on their patio, marg in one hand and a guac-dipped chip in the other.

The underrated Lalo Restaurant is nearby, too. The "Chino-Latino" hybrid is a perfect culinary harmony of two distinct cultures. Try their smoked margarita.

Both places are packed on Friday nights, so consider reserving a spot and expect a little extra wait.

7 p.m., Dance (or mosh) the night away at Fountain Square

In the very heart of the city, Fountain Square is home to a host of events. Reggae's on Wednesday and salsa takes the space on Thursdays. On Fridays this summer? A free concert series, every week.

Grab a seat near the fountain or snag a beer at one of the vendors/food trucks. This summer, the series will bring a host of indie-rockers, like Clap Your Hands Say Yeah.

Hop on the streetcar and take a ride over to the Rook, a tabletop game bar in the Over-the-Rhine neighborhood. The atmosphere is chill and, if you go during the day, their tots are incredible. Grab a cocktail (or two) and pick a board game from their extensive collection. Downstairs is a tad more rowdy than upstairs, if that's your thing.

Park on Vine Street (in OTR) and the Holtman's sign — a pink donut with sprinkles — will beckon you. And, most likely, you'll spot the line of loyal customers spilling out the door.

The first shop opened in 1960 in Loveland, Ohio. Now there are three more locations in the area. The donuts are flaky and warm. Pair with a black coffee for a wake-me-up.

Findlay Market, open since the mid-19th century, is a must-see experience. Every second and fourth Saturday of the month, they host a free 30-minute tour of the space. Shell out $25 and Cincinnati Food Tours will take you on a taste trip of the place too. Spoiler: It's all good. Try a meat-and-grain goetta (a Cincy staple), gelato and the works.

The bustling hub not only hosts vendors serving everything from deli meat and spices to Belgium waffles and coffee, but you'll find artisans as well, with offerings that include handmade candles, jewelry, local honey, pottery and hand-whittled wooden flowers.

As it name suggests, Pho Lang Thang serves pho. Slurp that up or chow down on a banh-mi, a Vietnamese sandwich complete with cucumber slices, pickled carrot, onion, radish, cilantro leaves, jalapeno pepper and your choice of protein. Either way, do try the Vietnamese-style drip iced coffee with condensed milk. It'll wire ya, but it's incredible.

ArtWorks hosts art mural tours ($20) across the city, including in the Over-the-Rhine district. Work off the pho by taking in a dozen or so of the neighborhood's murals, furled across a mile starting at "The Queen Shares" mural at the corner of Eggleston Avenue and East Central Parkway.

Circle back to yesterday's Smale Riverfront Park to find the adjacent Freedom Center. Entry is $15, and the space is a celebration of historic figures who blazed the Underground Railroad and, subsequently, new pathways to freedom. This center is not only an examination of slavery's history, but its lasting impact on America.

Since Over-the-Rhine is an ever-expanding cultural space with a hot culinary scene (when John Mulaney came to town, he compared it to Brooklyn) you'll want to follow your nose to whatever smells the best.

Seriously, you really can't go wrong. Want some pizza? A Tavola's got you. Feeling upscale? Salazar is incredible. Want to watch some anime with that bowl o' ramen? Quan Hapa will treat you right. Kaze is a sophisticated Japanese-cuisine stop and Poke Hut will make ya feel like you're in Hawaii (plus: bubble tea).The Eagle's got chicken for days and Panino has sandwiches made with locally sourced meat, along with some of the best fries in town. (For vegetarians, their grilled cheese with honey is excellent.)

7 p.m., see something at Know Theatre

Cincinnati has several venues that bring in large and small theater productions; we're looking at you, Cincinnati Shakes and Ensemble Theater Company. But if you want to experience something a bit more outlandish, the Know Theatre is the place to check out. After all, they're the hosts of the Cincy Fringe Festival, a celebration of all things weird. The space is a self-proclaimed "artistic playground where artists and audiences can come together." They give the little guy a shot and are at the cutting-edge of hosting indie productions.

I'm not insisting you try our chili (though you should), but at least try some of Cincinnati's brews. Featuring a great taproom, Rhinegeist brewery is a large, 25,000-square-foot space. (Really, very large: Right now they're housing a dinosaur skeleton as Cincinnati Museum Center undergoes renovations.) Try one of the brewery's signature beers and maybe play some ping-pong in between samples.

Before making the trek home, check out another local legend. Gomez Salsa is a hole-in-the-wall walk-up taco restaurant that's open until 2 a.m., so it draws in plenty of hungry late-nighters from the assorted bars in Over-the-Rhine. Try the Turtle Shell hybrid burrito, with a crisp tostado hidden within the fillings, to give it some crunch.

11 a.m., Nurse your hangover at The Blue Jay Restaurant

Cincinnati has its fair share of classic diners. Walk into Blue Jay Restaurant — which celebrated its 50th anniversary last year — on a Sunday morning and you'll be met with a smorgasbord of humanity: old folks, 20-somethings, double-daters, crust punks and middle-aged regulars.

Like something out of a David Lynch film, the diner is no-frills. On the menu? A little bit of everything. Breakfast, however, is divine and the coffee is damn fine. Laze around a bit and fill up your cuppa joe as much as you please.

Eden Park is one of the tweest places in the city. Watch goslings trail behind their protective mothers, see families picnicking in a quaint gazebo or spy birds washing themselves in one of the two ponds.

Up the hill, there's a scenic view of the Ohio River and Kentucky, doused in an industrial landscape. The park is also home to the Krohn Conservatory (a greenhouse currently hosting their annual butterfly show), the Cincinnati Art Museum and Cincinnati Playhouse in the Park.

As a finale, take a peek around the Cincinnati Art Museum, which hosts both permanent and rotating exhibits. The building itself is a beaut, and it houses more than 67,000 works spanning 6,000 years.

Before you leave, grab some food to go at the Terrace Cafe. Or, if you want to get wild, grab some Skyline Chili: Then you can say you lived the authentic Cincinnati experience.