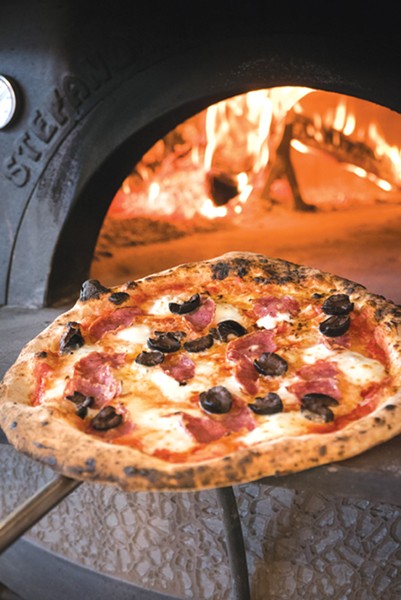 If you live or work in the Waterloo Arts District of North Collinwood you might have noticed a man walking around the neighborhood handing out free slices of pizza. Since firing up his wood-fueled oven earlier this month, Vytauras Sasnauskas has been a pizza-making tsunami, cranking out pies at a rate of almost 15 per hour, depending on the time of day. Try as he might, he simply can't eat them all.

You can't blame the guy. Despite the fact that he's had in his possession for months now the hand-built Stefano Ferrara pizza oven from Naples that will power Citizen Pie (15710 Waterloo Rd., 216-417-2742, citizenpie.com), the small cafe he's opening with Claudia Young and Velvet Tango Room owner Paulius Nasvytis, the chef hadn't until very recently tossed a single pie in that tempting glory hole.

"You can't just start building fires and making pizzas," explains Sasnauskas. "Only after it's fully cured can we bring it up to temperature to make a pizza."

The heart and soul of the restaurant, the 5,500-pound beast will set back an owner around $15,000. But add in transportation, installation, tiling and ventilation and that price easily doubles. Considering that amount of investment, it's wise to follow the time-tested practice of properly curing the oven.

"If you just build a big fire, all the moisture in the clay and mortar will come to a boil and it will crack, so you have to sweat it out really slowly," explains Sasnauskas.

So, over the course of two weeks, Sasnauskas would build and maintain small fires that did not exceed a certain temperature, roughly 400 degrees Fahrenheit. For an oven specifically built to absorb and retain heat, that's easier said than done.

Finally, just weeks before opening day, the chef built a fire to heat the oven up to its optimal operating temperature, about 925 degrees Fahrenheit on the floor and 1,000 degrees Fahrenheit in the dome. And he's been making pizzas like mad ever since in an attempt to zero in on the styles and combos that will make it onto the concise roster.

Divided into categories for red and white pizzas, the menu offers guests more than a dozen traditional and creative pies from which to choose. They are priced from $9 to $16 and utilize the highest quality ingredients for the job. Sasnauskas, the former chef-partner at Americano in Bratenahl, has an uncanny knack for combining ingredients in pitch-perfect arrangements that produce faultless flavors and textures.

The Roman is topped with smoked mozzarella, Gaeta olives, Calabrian chiles and stracciatella, the soft and creamy cheese center of burrata. The Verde is a dreamy concoction of mortadella, spinach, smoked mozzarella, pistachio cream and Castelvetrano olives. Of course, there are classics like the Marinara with fresh tomato sauce, oregano, garlic, basil and pecorino, and the Margherita with little more than tomato, mozzarella and basil.

The menu is rounded out by two calzones, one meat-based with salami, red onion, ricotta and mozzarella, the other a vegetarian version stuffed with spinach, roasted peppers, mushrooms, olives and cheese. There also are two desserts, a frozen chocolate truffle and slices of owner Claudia Young's light and lemony Naples-style cheesecake. Beverages will include beer, wine and, perhaps, a small roster of cocktails.

After the wood-burning oven, the second most important element in a Neapolitan-style pizza shop is the crust. For Sasnauskas, that means naturally fermented dough made with a type of soft wheat flour milled and blended specifically for wood-burning ovens. The pies take less than two minutes to bake, with the chef pulling them at just the precise moment.

"The crust should have uneven browning but not the big black carbon blisters," he says of the trend to push pies well past golden brown. "That doesn't taste good."

At just 875 square feet, Citizen Pie is a petite cafe with seating for around 25 at communal tables, pizza counter seating, and a window rail. An entire wall is shellacked with colorful posters of "revolutionary types" like Lenin, Dylan, Spartacus, Hendrix, Hitchcock and Che Guevara.

Citizen Pie is on pace to open early next week, joining other recent entries on the Waterloo strip like the Millard Fillmore Presidential Library and Packy Malley's, which in turn will be joined in the coming weeks and months by Six Shooter Coffee, a Mexican restaurant and a new bistro from Luxe Kitchen owner Melissa Cole. It's the type of development that neighborhood anchor Cindy Barber of the Beachland Ballroom has been eagerly awaiting for eons.

"We at the Beachland are very excited to have Citizen Pie open across the street from us," Barber says. "Chef V has been testing his Italian oven and bringing over sample pizzas for the staff to try, resulting in smiles and warm friendships growing between the two businesses."