City on the Brink

In Eastlake, this was supposed to be a year of triumph, not of turmoil. 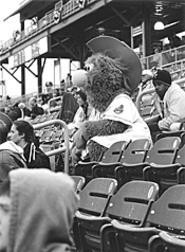 As government stability goes, the city of Eastlake lies somewhere between Cleveland and Baghdad. The natives aren't rioting, but they're awfully restless.

Mayor Dan DiLiberto built a minor-league baseball stadium last spring. Now he's laying off city workers en masse. He promised not to raise taxes. Today he's begging citizens to approve a levy. He had a sign installed on Highway 91, touting Eastlake as the "crown jewel of Lake County." Now, says one disenchanted resident, "They ought to take that crown jewel and pawn it."

Such was the mood at a city council meeting last week, where citizens arrived with rhetorical pitchforks. DiLiberto was conspicuous by his absence. Word was that the mayor had been hospitalized the previous weekend with a mild heart attack. If so, there was little sympathy in the room. "Very convenient!" several residents huffed.

Considering the crowd's howls for "accountability" and the fact that the Eastlake Police Department was providing both the security and the hostility during the public-comment session, DiLiberto was wise to stay home. But his nonappearance invited speculation: Is the mayor -- a longtime force in east suburban politics -- gone for good?

Among city officials, there is talk that, after 10 years in office, DiLiberto will file for disability and bow out, two years before his term ends. DiLiberto says he's not ready to step down.

Still, it's apparent that the mayor's soaring ambitions are starting to choke him. Chief among them is the new stadium, home to the Lake County Captains. It was a bold notion to begin with, given that Eastlake's annual operating budget is just $12 million. But a project that was supposed to cost about $15 million is now over the $24 million mark, according to documents submitted to the county auditor.

Early on, there were signs that this bedroom community was in over its head, with resources meant for the city being devoted to the stadium ["Money Pit Park" April 30]. But the mayor insists that city finances come from one pot, stadium finances from another. Ballpark overruns aren't the reason city workers are losing jobs, says DiLiberto. "The two things have nothing to do with one another." The real problem, he asserts, is a beleaguered economy.

It's a claim, however, that isn't finding many takers. Service Department union steward Paul Miller points to neighboring suburbs like Willowick and Wickliffe, which have witnessed no similar tumble. "The members, they think it's bullshit," he says.

And they appear to be right. In a report released last month, State Auditor Betty Montgomery noted that Eastlake had transfered road-repair money to economic development, the spending category dominated by the stadium. Unfortunately, that's illegal.

Montgomery also found the city's books a mess. Now, on top of all the other chaos, Eastlake must form an audit committee to remedy its bookkeeping.

To right the ship, DiLiberto must seek drastic cuts. Earlier this month, he asked one union to choose between pay cuts and immediate layoffs, but he could offer no guarantee against further layoffs. (Members took the layoffs.) The firefighters union is angry that the city isn't replacing retiring members. And the police union warns that heavy staff cuts could leave Eastlake patrolled by a single officer at a time.

Nearly every budget category will be cut by a minimum of 10 percent. At least one city pool will close. Residents will now have to pay for garbage pickup. Layoffs in the service department may mean that roads aren't salted and potholes aren't filled. It's gotten so bad that council members wonder aloud whether workers can get by without office supplies and whether they should more closely monitor the use of copy machines.

Without DiLiberto around to take abuse, Finance Director Jack Masterson had to face down critics alone. "I only have so much money to work with," was his refrain during two consecutive nights of budget hearings. (A visibly exhausted Masterson declined an interview request.)

Perhaps worse for DiLiberto, a once pliant city council is on the verge of open rebellion. Only months before, the mayor exerted Kremlin-like control over the body. Almost everything he wanted passed with near-unanimity. But last week, council members were quickly learning to play to the applause of an otherwise unruly audience. "I will not stand by as our city cuts police and firemen," council members took turns announcing, to the biggest cheers of the night.

After the hearings ended, it was clear that the campaign to replace DiLiberto had already begun.

"I just feel that the city has to go back to the residents," declared Councilman Bryan Lajeunesse to a crowd of residents. The remark seemed to suggest that during DiLiberto's 10-year reign, Eastlake had embraced another style of governance.

"It was a dictatorship," said one resident. Lajeunesse acknowledged the man's remark with a meaningful smile and a perceptible nod.

DiLiberto himself conceded only to a sense of "frustration" in the city. Amid the pandemonium of the budget meetings, the only thing the crowd and council seemed to agree on was the mayor's fiscal mismanagement. DiLiberto places the blame elsewhere. "It's the economy," he says. "But Eastlake will get through this and the city will be stronger for it."