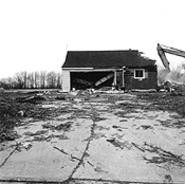 Many of the photographs in the new Cleveland Museum of Art exhibit, Photographs of Cleveland: A City Renewed, have the informal look of snapshots. When Jeff Brouws captures the city's factory districts, inner-city streets, and downtown, he seems unconcerned with what, if anything, lies beneath the surface. But as critic Susan Sontag has pointed out, even when photographs are most concerned with mirroring reality, "they are still haunted by the imperatives of taste and conscience." This is true of Brouws's work.

Sontag's widely admired 1977 book On Photography explores the role that photography plays in our culture. In the course of her analysis, she singles out the members of the Farm Administration Photographic Project during the Great Depression. Walker Evans and Dorothea Lange, says Sontag, would take "dozens of frontal pictures of one of their sharecropper subjects until satisfied that they had gotten just the right look on film -- the precise expression on the subject's face that supported their own ideas about poverty, light, dignity, texture, exploration, and geometry." Brouws has cited the influence of these Depression-era photographers on his own work and, sure enough, if one looks closely, it becomes evident that these shots of Cleveland, far from being neutral, are suffused with feeling. The melancholy mood is understated, but it's always there.

The roughly 20 works are part of a larger series called The American Cities Project, which includes, in addition to Cleveland, photographs of Buffalo, Detroit, Las Vegas, and Gary, Indiana. In the series, Brouws is like a visual sociologist. He seems to believe that evolving cities are laboratories, and that an artist can examine issues like history, economics, and race through photography. That is what he does in this show. If the news is not always good about Cleveland, one must remember that Brouws is an artist and not a civic booster.

Repeatedly, signs of nature, such as trees or water, are shown dominated by the industrial objects around them. In the finest photograph in the show, "House Being Demolished to Make Way for a Gated Community, Lyndhurst, Ohio, 1998," a house shown in the process of being torn down is caught off-center in a composition that features a driveway strewn with debris and a line of leafless trees that stand like sentinels in the far background, oblivious to the noise and destruction taking place. Similarly, in "Working Class Neighborhood/LTV, Cleveland, Ohio, 1995," a single thriving horse chestnut tree on a modest neighborhood street is juxtaposed with a steel plant in the background that is enveloped in a smoky haze. This kind of counterpoint is hardly accidental. Just as the sad but stoic expressions of the sharecroppers in Evans's and Lange's work led us to those photographers' respective views of Depression-torn America, the uneasy combination of prosperity and decay found in these works leads us directly to aspects of Brouws's vision of Cleveland. "House Being Demolished" and "Working Class Neighborhood" suggest that inhabitants of big cities are sometimes eclipsed by the objects around them. This is the dark side of the city of Jacobs Field and the new downtown.

You have to look pretty closely to spot the new, highly touted Cleveland, but it's here also. In some of these shots, there is a sense of randomness, of energy, of life that spills beyond the four corners of the frame. Brouws finds such energy in unexpected places. Instead of looking for it at Jacobs Field during an Indians game, he looks for it (and finds it) in an initially unprepossessing scene consisting of a steel mill, some freight trains, and a bright red truck. Brouws has somehow turned a mundane industrial scene into a strongly colored, boldly designed, and texturally varied abstract composition.

This 1998 photo, "Coke E, Cleveland, Ohio," shows a freight train (the Coke Express) carrying a cargo of coke in the foreground with a steel plant taking up the background. To the right there is a white corrugated tin building, and the contrast with the black coke granules in the freight cars is striking. Similarly, Brouws contrasts a deep red supply truck with the earthier rust tones of the steel plant structure in the background. The circular drum that constitutes the body of the truck is echoed in circular industrial parts elsewhere within the frame. Finally, the equally sharp focus at every one of the three spatial planes (back, mid, fore) tends to flatten the space, thus encouraging us to see everything as connected. One notices, too, how the photographer has taken care to balance the texturally simple objects in the foreground with the intricate machinery in the background, and how this progression from simplicity to complexity (paralleling our experience in viewing the work itself) has thematic implications: Steel remains a simple necessity, but a lot has to go right if it is to be produced satisfactorily and on time.

In its optimism, "Coke E" is a brief departure from the dark and foreboding work that makes up much of this exhibit. The aforementioned shots of the house being demolished and the neighborhood overlooking LTV recall that uniquely American creation, the ghost town. When pioneers in the Old West no longer saw a reason to stay someplace, they packed up and moved on. Leaving their past behind, they journeyed westward to build new and better towns. It seems that Brouws sees the same dynamic at play in the American cities he has chosen to photograph. Put simply, is renovating Cleveland worth all the effort? In addition to the obvious topical and sociological aspect to this exhibit, there is a mythic subtext that has to do with the American urge (celebrated in countless Western movies) to cast off attachments and seek a better future in an as-yet-untested landscape. Junking Cleveland altogether is not feasible, but there might be a wish to change it so completely that it hardly bears any traces of its former self.

Curator of Contemporary Art and Photography Tom Hinson seems attuned to this aspect of the work. He says, in a statement accompanying the show, that Brouws has a long-standing interest in "American culture's abandonment of the old for the new." Brouws tackles this issue directly in his photo "New Housing, Hough, Cleveland, Ohio, 1998." Here, in a work that is more conceptual than visual, Brouws seems to ask: Does one abandon the old city entirely (and turn it into a ghost town), or does one attempt to rebuild it so that it's worthy of new hopes? Brouws, like America, has a tough time deciding. What we have here is a rebuilt city that nevertheless looks like a ghost town.

The Hough photo contains a hefty dose of irony. Rebuilding old neighborhoods is here likened to a phony ad campaign wherein promoters tack on labels like "new and improved," though the product being sold, in all important respects, remains the same. A developer's sign announces that it's "a new day in Hough," but the wide expanse of dead grass surrounding the sign contradicts the optimism. It's true that there are new houses in the far background, but by emphasizing the sign and dead grass, Brouws has deemphasized new housing. His aim is not to congratulate the developers, but to encourage viewers to ask what progress means.

Struggles between the old and the new are taking place in big cities today, and photography can reveal mythical sublayers in our everyday lives that otherwise would go unnoticed. In Cleveland, where aging factory districts rub shoulders with new sports arenas, and where Hulett ore unloaders remind us of the past even as downtown's renewal instructs us about the future, there is much to be gained by taking exhibitions like this seriously. Brouws is able to see the city whole, and if he sometimes blurs the distinction between its ghost towns and its dynamic urban center, that's part of life in the big city.