Friday, January 28, at the House of Blues. 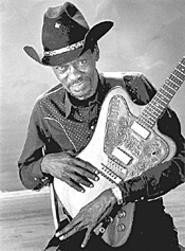 There are common threads running through all categories of roots music. And there's no better way to appreciate these overlapping arcs of Americana than to catch an artist who pretty much knows them all. In a category by himself is Clarence "Gatemouth" Brown, octogenarian guitarist, fiddler, and walking survey course.

Born in Orange, Texas, Gate came into early contact with Louisiana Cajun and Lone Star State blues and country. It was a short hop to swing and R&B. With a closetful of blues awards, Gate also became a known quantity in Nashville.

Brown first made his rep during the late '40s and early '50s, knocking down nonstop one-nighters and cutting classic sides that would end up influencing the likes of Stevie Ray Vaughan. These days, he's as sure-handed as ever, as evidenced by last year's Timeless, on which Brown navigates a tasty set of blues, country ballads, jazz standards, and swing fare in front of a solid lineup of horns and rhythm. As it is with Robert Lockwood, it's our good fortune to have a musical treasure like Gate still takin' the stage.