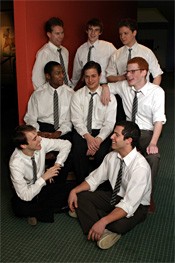 In the Beck Center's production of The History Boys, which opens tonight, eight teens at an all-male school in rural England study for their college-entrance exams. To get her cast in character for the Alan Bennett drama, director Sarah May had to give the actors their own history lesson. "It's an extraordinarily difficult play, because it operates on so many levels: They speak French, and there's references to figures in British literature that our education doesn't prepare us for," she says. "We had to spend a lot of time to catch up with the cultural aspects. But the boys are very smart." They also have good taste to perform in the Tony Award-winning play. First staged in London in 2004, the script asks whether students learn better from easygoing, knowledge-loving mentors or strict and competitive disciplinarians. "Are we trying to educate people to be better and more well-rounded human beings? Or are we preparing kids for tests?" asks May. "That's the haunting question that seems to have gotten worse in the last 20 years."When the teens aren't hitting the books, they deal with internal jealousies, raging hormones, and authority figures. The school's headmaster pushes the kids to be models of society, while one of the teachers raises eyebrows for getting too close to his students. "It's a wonderful play, because it's more complicated than four people sitting around in their living room, drinking martinis, and talking about their marriages," laughs May. "At its core, it's about two different kinds of education and the teachers that leave a lasting impression on our lives." Curtain time is 8 p.m. Fridays and Saturdays, and 3 p.m. Sundays, through Sunday, March 30, at the Beck Center for the Arts, 17801 Detroit Avenue in Lakewood. Tickets are $17 to $28. Call 216-521-2540 or visit www.beckcenter.com.
Fridays, Saturdays, 8 p.m.; Sundays, 3 p.m. Starts: March 8. Continues through March 30, 2008