At the Rockefeller, janitors worry that unionizing means unemployment. 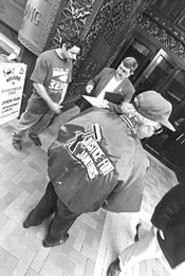 The attorneys streaming in and out of the Rockefeller Building barely notice the two figures huddled a few feet from the door. But the conversation is heated. "If they find out I'm talking to you, I'll get treated like shit," a cleaning woman confides to Dennis Dingow, a Service Employees International Union rep.

The union is trying to organize the nine cleaning women in the building, and management has made no secret of its resistance. "We're scared that we're going to lose our job," the woman says, explaining that she overheard one of her bosses threatening to replace workers with outside contractors if they unionize. "We get treated like crap when you guys are out here."

But if Dingow has his way, intimidating workers who talk to union reps won't be an option at the Rockefeller anymore. For several days each week, he has lurked here at 5 p.m. when the women arrive and at 12:30 a.m. when they get off, winning their confidence five minutes at a time. He had to overcome not only their fear of losing a job, but a language barrier as well: Six of the women are Eastern European and speak limited English.

His persistence has started to pay off, as several have grown brave enough to give out their phone numbers. Others aren't so secure. A Croatian immigrant is afraid the INS will take her child away if she signs a union card. Several are afraid to meet at a Starbucks around the corner, for fear their supervisor will pick that time to take a coffee break. "They're very leery," Dingow says.

The service workers' union, which includes nurses, security officers, and maintenance workers, is the largest and fastest-growing sect within the AFL-CIO, with 6,000 members in Cuyahoga County, about 1,200 of them janitors.

In 2000, janitors nationwide won steep concessions from cleaning companies as part of their "Justice for Janitors" campaign. Some 750 Cleveland workers gained raises of 22 percent or more, and 350 moved from part-time to full-time.

The union is girding for what could be a contentious dispute next year, when contracts expire in many cities. It wants to raise the minimum hourly wage for janitors from $8 to $10.

But with the economy in the toilet and a downtown office vacancy rate that makes Cavaliers games look packed, wringing raises from cleaning companies and building owners won't be easy. "Right now, the employers are crying about being poor," says Dingow.

That makes the union's recruiting effort all the more urgent. Since April, Dingow has organized several prominent downtown buildings, including the Tower City Complex. Only three holdouts remain: Reserve Square, the recently opened Federal Courthouse, and the Rockefeller.

The structure, built in 1905, is owned by Ben Cappadora and Michael Miller, who were part of an investors group that spent $10 million to purchase the IMG Center. Both declined comment through a spokeswoman.

Janitors at the Rockefeller make 12 cents an hour less than the union minimum and haven't seen a raise in five years, Dingow says. They also lack health care coverage.

Caroline Levine knows what it's like to work without a union. The 47-year-old cleaning woman at Key Tower recalls the financial hardship imposed when her son fractured his leg playing football in 1994. She earned just $6 an hour and didn't have medical insurance. It took two and a half years of skimping on birthdays and Christmas to pay the $3,000 hospital bill. "I had to sacrifice so much," she says. Now she works a union job for $8.90 an hour with health benefits.

"People look at this not as a union fight, but as a fight to lift the standards and lift the poorest Americans out of poverty," says Stephen Lerner, the national director of Justice for Janitors.

But organizing the Rockefeller won't be easy. Union members have been protesting outside the building for several months and have 200 signatures of support from tenants. Yet Dingow still must convince workers that pursuing health care won't instead lead to unemployment. Several workers were reluctant to speak on record.

If, as Dingow predicts, negotiations in 2003 turn ugly, Tommy Harris will be ready to fight. A feisty 66-year-old, Harris cleans the Keith Building and has been part of the union for 18 years. He still burns with the memory of his employer slashing his salary from $7.06 an hour to $4.30 in 1986. The union fought it, and after seven months of picketing, his boss jacked his hourly wage up to $6. Now he's protesting at the Rockefeller to get workers there the same protection.

"We beat it by going to the streets," Harris says, his voice rising. "We beat it by not quitting. I'm going to tell you right now, I don't like to lose. I've been around too long to lose. We gonna win! Put that in writing. Tell them: Here we come!"