Saluting a fabulous and miserable year on the stage. 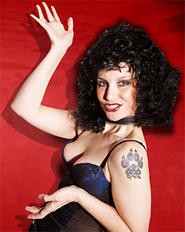 As the curtain falls on another year of Cleveland theater, we take time to reflect on the most memorable moments and the ones we're trying to forget:

Great Sex
Cleveland Public Theatre cornered the market on hot-and-steamy costumes in 2006. In director Craig J. George's M4M, an all-male version of Shakespeare's Measure for Measure, six men dove in and out of B&D costumes designed by Jenniver Sparano, creating a rousing evening in which even the cartoonish characters worked to perfection.

Not-So-Great Sex
The Full Monty is billed as the show where ordinary beer-slamming guys go frontal, but don't you believe it. Beck Center did what it could with this limp shaggy-dog story, but even Rob Mays' cut torso couldn't jump-start the proceedings.

When the Rock Didn't Roll
It was a mixed year for shows about singing icons. On the plus side, the Carousel Dinner Theatre brought nerd-turned-knockout Buddy Holly to life in The Buddy Holly Story. Pat McRoberts was hypnotic in the title role, adopting a diffident manner in offstage scenes and a raging rock aesthetic while singing.

The real Denny Doherty fared not so well in his Dream a Little Dream at the Play House. It's his attempt to turn a transcript of his talk-show interviews into a script studded with hits from the Mamas and the Papas. The worst part: Denny focused on himself, while the giant talent in the group, Mama Cass, got short shrift.

Fun With Child Abuse
If there was one repeated concept in the past year, it was, oddly enough, the notion of doing nasty things to children. Fortunately, none of the mayhem was gratuitous -- it all served serious dramatic purposes.

In the shattering play The Pillowman, Dobama and director Sonya Robbins shaped stories about a boy getting his toes cut off and a girl crucified by her parents into a riveting but very disturbing evening.

In the often engrossing Rabbit Hole at the Play House, the juvenile damage happened offstage, as a couple's four-year-old was accidentally killed by a passing car.

Meanwhile, Akron's Bang and the Clatter mounted Frozen, in which a young girl was abducted and murdered. The same troupe then doubled down with The Long Christmas Ride Home, in which the kids saved their deepest misery for adulthood.

The Sequined Swine Award
Fourteen tons of spangles and sparkles were used in Bombay Dreams at Playhouse Square, but nothing could make that lumbering, tuneless, brain-dead ode to Bollywood shine.

The Award for Best Staging
It's a tie between the downpour that drenched the actor and the first couple rows in Carousel's Singin' in the Rain, and the unique traveling staging of Fefu and Her Friends at CPT, in which the show meandered from room to room in the theater's complex, with the audience toddling along.

Honorable mentions go to Bang and Clatter's Griller, in which real steaks were grilled onstage (not far from a large, offstage swimming pool), and Lakeland's gorgeous pointillist set for Sunday in the Park With George.

Flogged With Symbolism
Playwright Edwin Sanchez overcooked his sun imagery in Icarus, so the play at Convergence-Continuum eventually felt like a lecture in Literary Devices 101. It was excessive even for the two people who didn't have a clue who Icarus was.

The Pipes, the Pipes Are Calling
The best vocal performance of 2006 was turned in by Maureen McGovern, who single-handedly turned Little Women at Playhouse Square into a can't-miss event; she actually made time stand still in her two lush and beautifully phrased solos.

Finishing a close second are all the singers in damn near any show at Kalliope Stage, bless their unamplified larynxes.

They Called It What?!
Poona the Fuckdog, and Other Plays for Children, just another day at the office for the folks at Convergence-Continuum. And it was actually quite delightful.

Centuries of Silliness
It's hard to top Spamalot when it comes to rampant silliness, what with the "Fisch Schlapping Song" and the Taunting French Guard who aims farts and exploding pimples at the attacking hordes. But the Great Lakes Theater Festival gave the Knights of Ni a run for their money with their raucous Love's Labour's Lost, which featured Andrew May as Armado, less a man than an ambulatory orgasm, and a Bill Murray Caddyshack act-alike (Jeffrey C. Hawkins) as dim-witted Costard.

Tied for third were the hilarious Karamu production of The Colored Museum and Great Lakes' A Funny Thing Happened on the Way to the Forum. Same Show, Different Show

Sometimes an old clodhopper can be reimagined as something that looks like the latest Manolo. The Play House did that with a thrilling My Fair Lady, directed by Amanda Dehnert and highlighted by a spare stage, grandstand seating instead of period furniture, and two pianos front and center. Top-flight portrayals of the professor and Eliza made it a captivating evening. And the Porthouse Theatre accomplished a similar transformation of Our Town, as director Matthew Earnest stripped it bare to reveal the script's throbbing humanity.

Same Show, Same Show
It isn't always necessary to rejigger a show to make it memorable. Beck's straight-ahead production of The Diary of Anne Frank was immensely powerful, thanks to the sensitive direction of Sarah May and some dazzling performances. There are still some lingering goose bumps from the last scene, as the Gestapo invade their sanctuary.

Clean Up That Mess Now!
Animals are usually lovable, but the creatures in Dr. Dolittle at Playhouse Square were creepy, ungainly, and downright unfunny. As the doc, Tommy Tune was still lithe at 67, but the show was arthritic and drooling on itself.

Memorable Shows We Forgot to Remember
Mrs. Warren's Profession and Beauty and the Beast at Beck, Wicked at Playhouse Square Center, Intimate Apparel, Custody of the Eyes and Well at the Play House, Sorrows and Rejoicings at Ensemble, Dream on Monkey Mountain at Karamu, Pack of Lies at Cesear's Forum, Night Bloomers at Dobama, Much Ado About Nothing by the Ohio Shakespeare Festival at Stan Hywet Hall, and Dames at Sea at Porthouse.