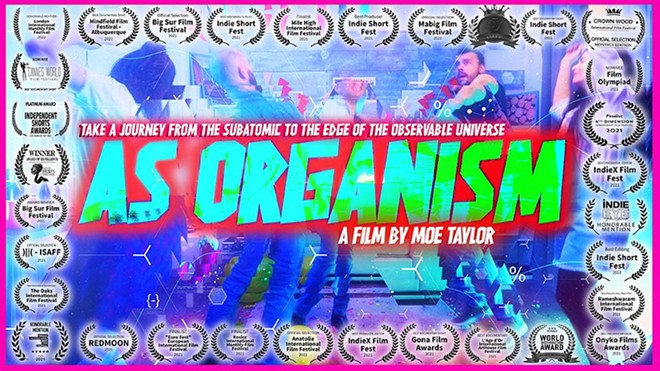 CLEVELAND, OH, USA, August 3, 2021 /EINPresswire.com/ — Moe and Kathryn Taylor's Cleveland based film studio, BrainDagger Films has done it again with their mind-blowing documentary "As Organism". It’s a high-speed thought experiment dense with high-concept mental stimulation created to make your brain throttle at its absolute maximum. It was created simply, to explode your head. Moe has just released it on Youtube free for the general public as BrainDagger is a non-profit studio. Blow your mind for free with the link below!

Join Rachel Sellers and Alan Watts for a journey in scale from the subatomic world to the edge of the cosmos as they open your eyes to the possibilities of the universe as a single organism. Discover the range of patterns that design the world around us and the mathematical properties inherent in the building blocks of everything we know.

We must learn how to understand our perceived enemies’ point of view and figure out how to get along with each other or there's little hope for society and civilization as we know it. We are in the midst of a global societal collapse and it is important to show films like this so we can possibly slow it down and maybe even stop it before it’s too late. STOP HATING PEOPLE BEFORE YOU MEET THEM. Please?

This is episode one of the couple's new series, BrainDagger Films Presents: Knowledge is Good. This is a ten-part docuseries with the insane goal of teaching people how to get along and understand others through weird (important) science and philosophy. Moe and Kathryn have the lofty goal of helping bring the world back from the brink, so they figured, "What the heck? Might as well give it a shot, it’s better than doing nothing right?" If you think's it’s a grandiose claim, just watch it. Its only 32 minutes. The link is right up there.

Bold? The movie actually lives up to the hype as these reviews show:

Excerpts from these reviews:

“If you think a science documentary has to be super boring, think again… this short film is absolute proof of that.”

“If you want a great masterclass of how to edit for interest, As Organism would work wonderfully as a teaching tool but make no mistake, you just may find yourself lost in the film. I'm pretty confident that was the plan all along.”

“It's loud, and it's fun, and it also teaches you something.”

“This lower-budget short film has outdone plenty of the big guy productions I've seen from a technical standpoint.”

“As for the film in its entirety? Excellent. Very well done.”

“It has no problem keeping you hooked no matter what you believe.”

“As it was stated in the film, "As Organism" could lead to an overload of the mind – but as long as you keep a little of what you've seen in the back of your head, your perception of things may forever be altered.”

“There's nothing basic about this short film – at all.”

“We are barraged with one video image after the other. It’s vibrant, colorful, and relentless.”

“Moe Taylor’s As Organism is a documentary short, shot in a visually over-stimulating MTV style that is hard to pull off and so easy to fail. In Taylor’s case, he found the secret, and it works.”

“There are so many projects out there and that most of them are just retreads of stories, but apparently new takes on concepts are still out there to be found, and that is nice to know.”

Episode two is titled "A Message for Classification Upgrade". They are currently seeking funding for this project. Here's the synopsis:

The human race is at a crossroads where the designator Homo Sapiens is no longer a valid classification. We no longer evolve to adapt to our surroundings, we are now at the point where we adapt our surroundings to serve ourselves. In this episode Rachel and Alan explore mankind's symbiosis with the Earth and technology and discuss the fact that we are now in control of our own evolution. Some of the problems we will have to deal with in the upcoming 30 years are the effects of drastically longer lifespans, finding meaning in a post-scarcity society and harnessing the energy to make it possible while avoiding a highly probable self-destruction. We will also discuss the Kardashev scale and its ramifications for a spacefaring society. Whether we become a species of digital uploads, cyborgs, symbiotes with the solar system or extinct is all up for grabs in this episode.