With Ratatat and Aloha. Monday, May 10, at the Grog Shop. 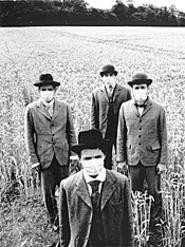 For a brief moment in 2002, a British rock band landed in America that deserved every knob-slobbering syllable of praise it would receive. Yes, Clinic is all that and a bag of fish 'n' chips. Taking the stage in surgeon's drag initially earned the Liverpool quartet novelty-gimmick points, but it's the way they doctored seminal '60s-'70s rock (garage, kraut, and art) that made them worth your diminishing disposable income. Clinic's melodies sound immediately classic and memorable, as if preserved in amber and then subtly alchemized into gold for maximum impact: Dig how the band cheekily pays homage to and funks up Johnny Cash's "Ring of Fire" on Internal Wrangler's "T.K." Lead singer Ade Blackburn ferments the whine of Placebo's Brian Molko until it loses its drama-queeniness and distills into a cooler version of Suede's Brett Anderson. On 2002's outstanding Walking With Thee, Clinic connects the dots between Velvet Underground, Can, '70s dub, and the '60s garage-rock iconoclasts the Monks. Tonight's show is likely to feature songs from their forthcoming album (due this fall), which they describe as "more brief snapshots of situations and events. These can include extreme happiness, psychosis, and fishing."