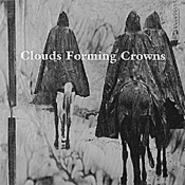 Like many brothers, Tim and Todd Tobias are skilled at finishing one another's thoughts. They've collaborated on music since childhood, most notably in Guided by Voices -- Tim played bass and Todd produced a handful of the defunct indie-rock darling's recent records.

The duo's latest project takes its name from the title of last year's debut from Bloom, Tim's first gig post-GBV. Clouds Forming Crowns functions in much the same way that group did: Tim comes up with the framework of songs, Todd fills in any open spaces with all manner of chiming instrumentation and whirring sound effects. The result is busy, changeling pop, darkened by Tim's abstract lyrics ("And the birds give birth to falling split native tongues into dope scars rise to derive"). The band's debut features all manner of pretty, pristine songs ("Dreaming of Flying"), papier-mâché ballads ("Let's Bleed"), and even wayward disco ("Collapsing the First String"). Here, family ties are the only things that bind this duo's refreshingly formless rock and roll.