Junior golfers get ready for action. 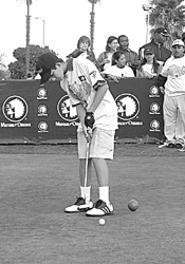 Eric Bartels can spot the next Tiger Woods if he sees him. As the brains behind the Golf Channel's Mutual of Omaha Drive, Chip & Putt Junior Challenge, Bartels runs the tourney for linksters between 7 and 14 years old. Players compete in four age groups to golf for trophies at a regional playoff in Michigan in July and the national match in Orlando in October.

The tournament starts with a driving competition, where each golfer gets two shots on a 40-yard-wide fairway. The player with the longest drive that stays in bounds scores the highest points. "Sometimes, children hit the balls out of bounds, and that's OK," says Bartels. "We give every kid a score, kinda like the SATs, just for showing up."

In the chipping competition, players have three chances to hit their balls from the rough onto the green. The kid who chips closest to the hole racks up the points.

The tourney closes with a two-shot putting challenge. "[Kids] get to compete in a golf-regimented style that is focusing on safety and fun," says Bartels. "At the same time, it's getting them to play their best." Tee time is from 4 to 7 p.m. Thursday at the Range, 1325 Center Road in Avon. Admission to play and watch is free. Call 440-937-9464 for more info. -- Cris Glaser

We're pretty pumped that the Port Clinton Walleye Festival is celebrating its silver anniversary this weekend. In addition to the fishing outing that kicks off the whole shebang, there are vintage baseball games, wildlife seminars, food, martial-arts demonstrations, a parade, a beer garden, live music, and a human statue. The festival runs from 5 to 11 p.m. Thursday and Friday, 11 a.m. to 11 p.m. Saturday and Sunday, and 11 a.m. to 5 p.m. Monday in downtown Port Clinton. Admission is free. Call 800-441-1271 for more information. -- Lucy McKernan