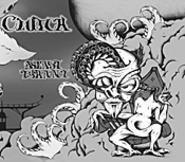 Clutch frontman Neil Fallon sounds as if he was born with a mustache and a Supernova. He sings of muscle cars and goats in a gruff holler that's no doubt the product of a permanently roached throat. It's combined with perhaps the most swinging rhythm section in all of contemporary hard rock; this may be the only bunch of Sabbath disciples that knows how to do the hustle.

On the band's fifth LP, guitarist Tim Sult plays like an orphaned Allman Brother, coming with greasy, beer-battered riffs by turns funky and fierce. Dusky, reverb-saturated rural blues ("Regulator") and goose-stepping, Grand Funk-worthy stompers ("Army of Bono") sweat it up alongside the baked boogie that's spawned Clutch's cult following. The latter half loses a little steam, but you'll still have a blast letting out the Clutch and stepping on the gas.