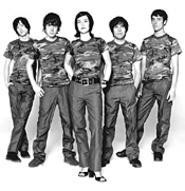 For a man who claims that capitalism stole his virginity, Dennis Lyxzen laughs a lot. Even battling a cold -- not to mention corporate hegemony, the commodification of art, consumerism, and Wal-Mart's everyday low prices -- the frontman of Swedish Marxist mods (International) Noise Conspiracy is remarkably amicable. And yet, to borrow a line from fellow hardcore politicos C.O.C., if the system had one neck, Lyxzen would gladly break it.

But despite his propensity for lining his band's album sleeves with inflammatory quotes from decidedly non-footloose types like Milan Kundera and Vladimir Majakovsky, and speaking at length about how the family unit is merely a cultural construction to maintain a steady labor force, Lyxzen and his bandmates would rather dance than demonstrate. They're more inclined to shake their asses than their fists; to join the dearly departed Bikini Kill in screaming, "I believe in the radical possibilities of pleasure, baby. I do! I do! I do!"

"It's always been a part of the plan for this band to show people that politics can be put in another perspective," Lyxzen says. "So many bands are just so dystopian. They talk about politics, but you don't get excited about politics. We just try to flip that and show people that we're human beings that like to have a good time."

But having a good time in leftist politics is as taboo as high-fiving Pat Robertson. And that's precisely why its appeal has become so limited. By being as wooden as Che Guevara's casket, bands like Rage Against the Machine, Consolidated, and Godspeed You Black Emperor! have often inadvertently contributed to the marginalization of the very activism they espouse. In their stern, single-minded allegiance to their cause, these artists often make audiences feel as if they have to choose between being militant and engaging in any other aspect of the human experience -- you know, like trying to get laid -- as if enjoying oneself diverts a person from his political end.

It's this cold rigidity of the revolutionary that the Noise Conspiracy works to counter by being damn near as preoccupied with spreading legs as socialist palaver. And as for the stereotypical fatalism of the unsmiling insurgent, well, the Noise Conspiracy leaves that in the capable hands of Jello Biafra and Chicago Cubs fans.

"It's so obvious to point out the fact that the world is shit, the system sucks. We all know this, more or less," Lyxzen says. "So we wanted to be like 'Well, maybe the world does suck, but look at all the great things that are happening: all the fucking fantastic people, the great movements, and acts of defiance happening everywhere. Instead of talking about oppression, we try to talk about resistance."

Of course, this is done with a wink. In the liner notes of its sophomore effort, 2000's superb Survival Sickness, the Noise Conspiracy urges people to engage in such friendly acts of subversion as playing acoustic versions of songs by the Angry Samoans in posh cafés; bathing in public fountains; going to Burger King at lunch with a group of friends, ordering water, and taking up every available seat; and yes, spending more time naked.

This intermingling of liberation with the libido recalls the halcyon days of protest music in the '60s. It's this era that the Noise Conspiracy mines liberally, with bell-bottomed guerrilla soul that approximates the rumble of the MC5's bad motor scooter, freshly waxed with James Brown's Afro sheen. With serrated organ doing the bunny-hop all over a rhythmic hip-thrust, the Noise Conspiracy is the kind of band that leaves audiences needing a cigarette.

Likewise, in terms of ideology, the Noise Conspiracy is also a throwback to the '60s. Four decades ago, politically provocative music wasn't nearly as detached from our everyday existence as it has since become. Nowadays, politically minded musicians tend to speak in broad terms about bulls on parade or red flags and bags. But obviously, each of us is the brick and mortar from which any social structure is built, so there's no use attempting to critique the latter without developing an understanding of the former. This is why, in years past, the personal was celebrated with the same enthusiasm as the political -- why Bob Dylan danced with those rainy-day women before fleeing Maggie's farm.

It's this experiential, lived-in nature of '60s protest music that the Noise Conspiracy attempts to breathe new life into. This is especially evident on its third album, the recently released A New Morning, Changing Weather, which delves into sexual politics in an attempt to humanize activism.

"What we tried to do on this record a bit more than on the last one is take the culture, the power structures, and the economic systems down to the level of the individual," Lyxzen says. "How is our sexuality affected by the culture we live in? We wanted to push the subject to the individual."

In bringing politics down to the kind of intimate, interpersonal relationships that we all engage in, the Noise Conspiracy provides a tangible touchstone to resistance that anyone can relate to. This is essential if any kind of meaningful political change is hoped for, because there's nothing more maddening -- and ultimately fruitless -- than raging against opaque oppressors like The Man or The Powers That Be. Who really knows what these designations even signify? And what possible good could it do to revolt against indistinct authority figures? Revolution isn't about changing the world as much as it is about changing oneself, because only when the latter objective is achieved can the world follow suit.

"We usually say that, if Bob Dylan couldn't change the world, there's no way we can," Lyxzen says. "As a revolutionary force, [music] is kind of outdated, but I think as an inspiration it's still valid. It's still valid to play music and talk about political ideas and inspire people about them. During the '60s, the '70s, and the '80s, there was always a musical movement to coincide with the big political movements of the time. In the '60s, you had the hippie movement. In the '80s in England, you had a great musical/ political scene. Now, in the year 2001, there's a really big, growing political scene, but there's not a big musical scene to coincide with that, which I think is really sad. The future is there; it's up to us to reach out and grab it and do something about it. You have to hope. You have to allow yourself to be a naive, romantic dreamer from time to time, or else you'll easily fall into the exploited, nihilistic punk behavior. That's just not good for you."